Theatre of the Wild, Beautiful and Damned is the creation of Lee Mark Jones AKA Gypsy Lee Pistolero and specialises in chaotic and surreal contemporary theatre and performance.

This year Theatre of the Wild Beautiful and Damned will bring Rock ‘n’ Roll Suicide to Edinburgh Fringe.

Rock ‘n’ Roll Suicide is coming to Zoo Southside what can you tell us about it?

Ziggy Stardust takes us on a tragical Mystery Tour through the life of a nearly- was- Rock star, Gypsy Lee Pistolero, AKA Lee Mark-Jones! This one man- show plays out against a backdrop of videos and scenes from his early life, our jaded, ageing rocker sings along with his young pretty self and belts out songs from Punk to the Present, from an initially glamtastic, then tragic Rock N Roll career. It’s a tale of anarchy, rage, sadness and laughter. It’s a struggle between damnation and salvation. Its story of a man who comes to terms with himself after the diagnosis of a condition that unknown to defined his life.

What inspired you to write Rock ‘n’ Roll Suicide?

Discovering at the tender age of 56 that I have ADH, borderline personality disorder and autism inspired me to look back on my Rock n Roll life and reassess all the ridiculous illogical decisions I took. Also, the Lemmy (Motorhead) and Axl Rose, Slash and The Ramones stories I have, just had to be told.

What’s the one thing about Rock ‘n’ Roll Suicide that makes it different from all the rest?

It is an autobiographical journey through my life, the retelling of the ‘nearly-was’ pop star? It’s all true! Raw, brutal, honest, hilarious, tragic, poignant and hopefully entertaining. Musicians, music lovers, especially those into Rock /punk music will love it. All true unheard stories from and about Lemmy, Axl Rose, Joan Jett, Blondie, the Ramones and more. It’s my story, as someone who toured and lived with them in the Rock ‘n’ Roll circus. Now in later years after discovering I have ADHD, a borderline personality disorder and autism, I look back at how it affected my choices and life. It’s just a Shakespearian tragedy, only real, it pulls no punches. Google Gypsy Pistoleros and Gypsy Lee Pistolero to witness the end of a car crash rock n roll career. It bleeds in your face onstage!!

Who will Rock ‘n’ Roll Suicide appeal to the most?

I intend to attract a new kind of audience which does not usually go to the theatre; an audience craving strange journeys of darkness, horror, suspense, and wonder. All these thrills we will provoke into life, in the flesh, breathing and bleeding on stage, and right in your face. saying that musicians, music lovers, especially those into Rock /punk music will love it.

How have Zoo Southside supported you with this production?

The Zoo Southside, Mina & Cameron et al, are fantastic!!! They take a chance on new exciting performers and shows. They are eclectic, off the wall and pioneers in many respects. I’m thrilled to be appearing at the Zoo (Southside) I wanted that Venue & space ever since I saw All those things Live Art Festival last year.

What would you say to people thinking of coming to see Rock ‘n’ Roll Suicide? 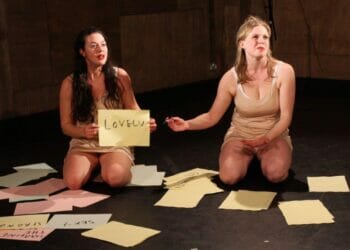