From Ibiza to The Norfolk Broads Review Edinburgh Fringe

You don’t have to be a David Bowie fan to understand the huge influence he had on the British music scene, his songs are instantly recognisable and he also enjoyed a successful acting career.  His theatrical debut was in Edinburgh in 1970, so it seems appropriate that following a run in London and UK tour, From Ibiza to the Norfolk Broads should make its way to the Pleasance Courtyard at Edinburgh Fringe.

Written and directed by Adrian Berry, this homage to Bowie is an endearing road trip which follows in the footsteps of the musician through a teenage boy named Martin.  It’s clear from the outset that Martin has problems, his father left when he was two, leaving behind a treasure trove of Bowie memorabilia, which has sparked an obsession in Martin.  But the events of his life have also led to Martin cutting himself and an eating disorder.  On his 18th birthday he is given a card that his father left for him, it takes him on a treasure hunt around London, but he doesn’t know what treasure he will find at the end.

The simple set is used effectively, the white gauze background allowing for video projections and platforms forming everything from a record store to a London telephone box.  Sound is also used effectively; as well as the expected David Bowie music there are voice overs and sound effects which really help create the chaos on the streets of London, and the chaos in Martin’s mind.

Performer Alex Walton, is wonderful as the troubled Martin, plus all the other characters he picks up along the way.  It’s a very physical performance which screams pain and unhappiness, but also a sense of wonderment at what could be in store.  It’s a very beautiful performance to watch, especially when combined with the rich descriptive language, allowing you to fall deep in to the story.

From Ibiza to the Norfolk Broads takes the legend of a well-known musician and blends it with expert storytelling to create an intricate tapestry that is a joy to watch, Bowie fan or not. 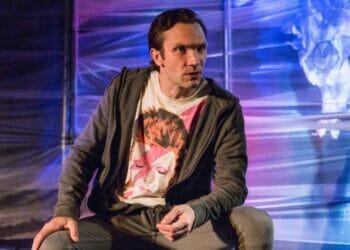 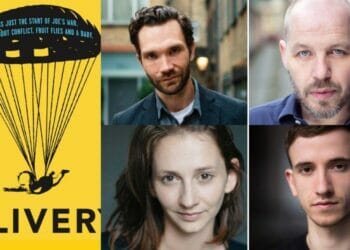