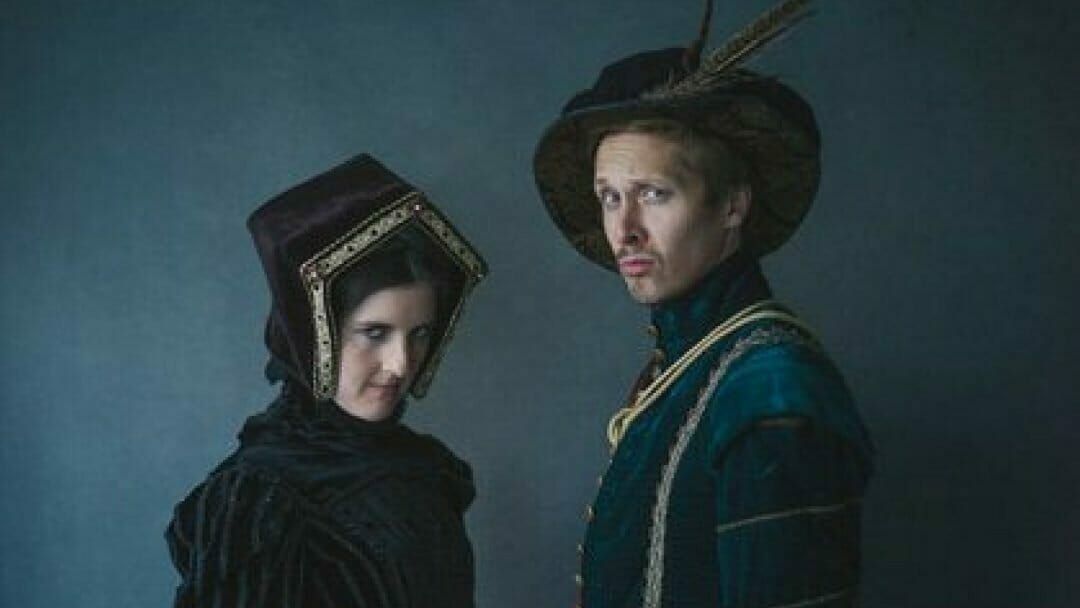 On the heels of their last show Great British Mysteries, a mockumentary style stage show “investigating monsters, myths and Noel Edmonds”, Will Close and Rose Robinson return with Great British Mysteries: 1599 a period sequel that’s a silly, amusing romp through Tudor times. You can see it every day at the Pleasance Courtyard at 4:45pm.

The show sees the return of fearless mystery hunters Olive Bacon and Teddy Tyrell. Teddy misses the days of exploring the world with Sir Walter Raleigh. Olive has left the countryside for London, having never felt quite at home there. Bumping into each other in London, they soon realise their true calling is to solve mysteries together. They crack countless cases, but come across a literal witch-hunt that proves to be their greatest challenge yet.

If you’re looking for a reverent, historically accurate show about the Tudors, this isn’t it. The show, which aims to take you “back to the 90s… the 1590s” frequently breaks the forth wall with topical jokes and 90s pop culture references. Plenty of humour is found in the show’s immersive mix of audio, video and text appearing on the screen behind them. At one point you get to be part of the show by wearing your own ruffs, cut from paper plates, for a trial scene.

The jokes are chunky and packed into every line. Think a historical Naked Gun movie. There are plenty of clever one-liners, but many veer into references-with-no-joke Family Guy territory. Some of the set-pieces feel a bit too long, such as a recurring joke where Teddy, the stupid one (and there always has to be a stupid one), doesn’t know how to deliver a punchline. The two actors, however, are superbly expressive comedic actors. They sell the material confidently and play off well against each other.

If you’re looking for some silly historical humour, you’ll be happy with Great British Mysteries: 1599. You won’t learn much about Tudor times, but you’ll enjoy this crowd-pleasing hour of comedy.