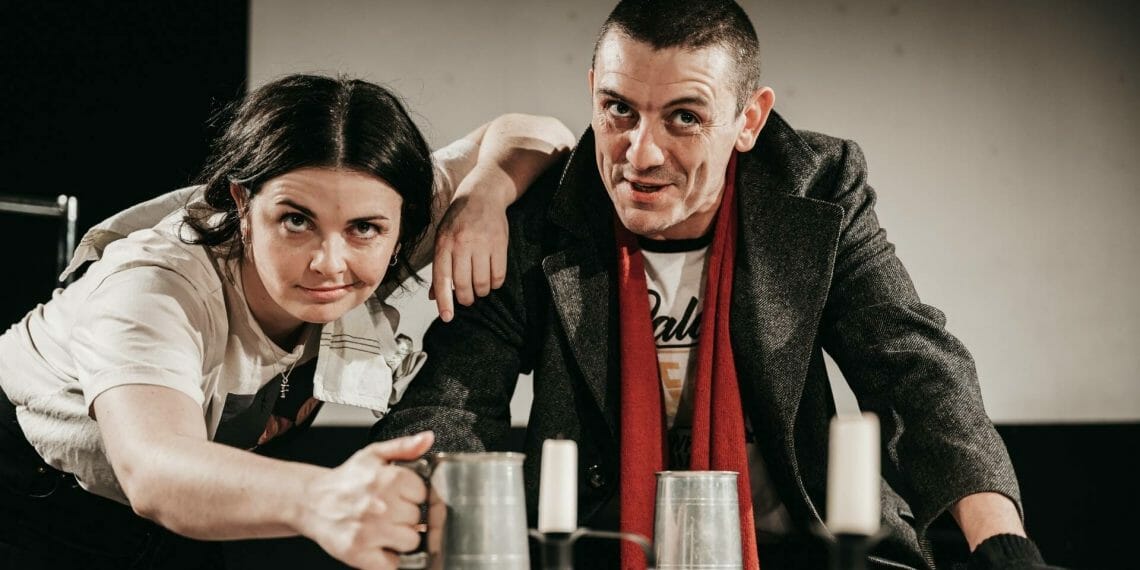 First look rehearsal images have been released for Alexander Knott’s Cratchit, which reimagines the well-loved tale of Ebenezer Scrooge from the perspective of Bob Cratchit.

As a hard frost descends on London Town, Bob Cratchit gets his own visit from the spirits of Christmastime. Catapulted forward through the years, the poorly paid clerk is shown a bleak vision of the future world: inequality and strife perpetuate, while the gap between the 1% and everyone else grows wider. Cratchit is a darker look at the Dickens’ tale of redemption, a call to arms against injustice and rallying cry for solidarity and fortitude.

Cratchit premiered online under the title December at the Old Red Lion in winter 2020. It was streamed to audiences at home during lockdown to critical acclaim. The play captured the troubled image of the future world shown to Bob Cratchit and fleshed out Dickens’ famously upbeat character, showing him to be a stoic but flawed man soldiering on against the odds. It has now been reworked in preparation for its live premiere at Park Theatre this Christmas.

The lead role of Bob Cratchit is performed by John Dagleish. The actor won the Olivier Award for Best Actor in a Musical for his performance in Sunny Afternoon at the Hampstead Theatre and Harold Pinter Theatre. His other credits include Sylvia and A Christmas Carol  (as Bob Cratchit) at The Old Vic, and A Midsummer Night’s Dream at the Young Vic. He is joined by Freya Sharp as Martha Cratchit. Freya’s previous work includes; The Bandaged Woman and Nuclear War at the Old Red Lion Theatre in Islington.