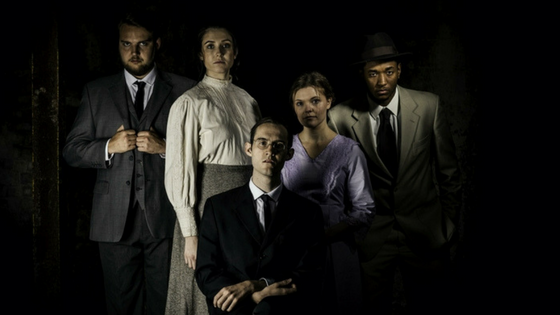 Both promotional and rehearsal photos have been released for the highly anticipated promenade production of Alfred Uhry and Jason Robert Brown’s Parade at the world’s oldest working paper mill, opening on the 7th of September.

Connor Dyer will play the role of Leo Frank, with Sherelle Keheller as his wife Lucille. Philippa Rose will play Mary Phagan with Tré Copeland-Williams playing the role of Jim Conley. District Attorney Hugh Dorsey will be played by Thomas Isherwood.

Produced and Directed by Dan Cowtan, Parade will be staged at the Frogmore Papermill in Apsley, Hertfordshire from the 7th – 16th September, and will also be the first professional production to help restore the life and use of the mill. Audiences will move throughout the building during the performances creating both an immersive and interactive experience of this emotional story.

Parade tells the heart wrenching true story of Leo Frank, a Brooklyn-born Jew living in Atlanta, Georgia. Frank was accused of the murder of his 13-year-old employee Mary Phagan in 1913. Already guilty in the eyes of everyone around him, a sensationalist publisher and a janitor’s questionable testimony along with a litany of false testimonies, clearly lacking any clear, real evidence seals Leo’s fate. His only defenders are a Governor with a conscience, and, eventually, his Southern wife who finds the strength and love to become his greatest champion.

Global Search Launched on World Theatre Day for Composers to Write ‘A Song for our Time’ in Response to the COVID-19 Pandemic in Aid...

Review: The Bridges of Madison County at Menier Chocolate Factory

First Look: The Bridges of Madison County at Menier Chocolate Factory in Rehearsal