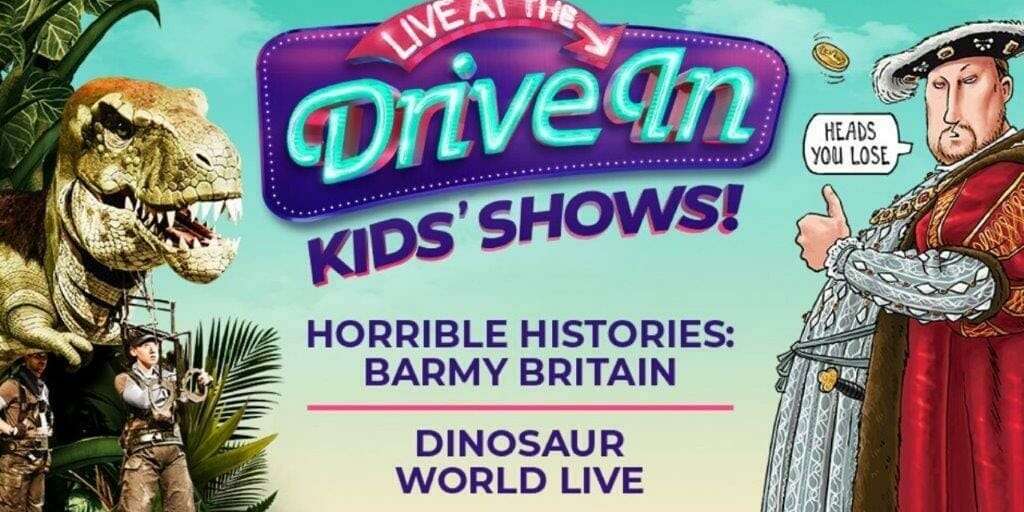 The Drive In at Troubadour Meridian Water announces live theatre for families and kids this summer with Live At ‘The Drive In’: Kids Shows.  Initial programming includes the West End production of Horrible Histories – Barmy Britain from 19 – 23 August 2020 and the roarsome interactive show Dinosaur World Live from 26 – 30 August 2020.

The Drive In is fully contact-free. The gruesome and hilarious facts of Horrible Histories and the majestic roars of Dinosaur World Live will be played direct to your vehicle’s FM radio. Performances are in a raised central location and relayed back to a giant cinema screen, giving everyone a great view wherever they park up. Snacks and drinks are available to order from your mobile and will be safely delivered to your car by a team of 1950s drive in attendants.

Based on the best-selling books written by Terry Deary and published by Scholastic, Horrible Histories live on stage first launched in 2005 with the world premieres of Terrible Tudors & Vile Victorians. Since then the Birmingham Stage Company has produced eighteen different Horrible shows, performing to over three million people in the UK, including the longest running children’s show in West End history, with its record-breaking series Barmy Britain. Horrible Histories live on stage has also become a worldwide phenomenon, performing in Hong Kong, Singapore, Dubai, Qatar, Oman, Abu Dhabi, Bahrain, New Zealand and Australia, where it performed in the Concert Hall of the Sydney Opera House.

Working with health and safety experts, the entire experience is designed to be contact-free, and the team will be working to strict protocols to ensure the safety of the staff and guests. Tickets will be scanned through closed car windows, cars will be parked 2 metres apart, and food and drink will be ordered from audience’s mobiles and delivered to their vehicle. Toilets will be available and will be cleaned regularly. All social distancing guidelines will be adhered to and updated in accordance with government guidelines. Should guidelines change over the coming months, guests will be entitled to exchanges or refunds for any cancelled performances.

There will also be 10 free car tickets per showing to NHS and care workers*.