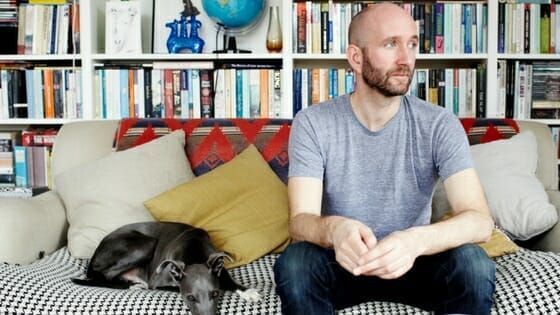 Interview: Glenn Waldron on The Here and This and Now

Simon Stokes directs the dark and enigmatic comedy The Here and This and Now by Glenn Waldron at Southwark Playhouse. The play takes an intriguing and intelligent look at the medical industry and asks in these politically uncertain times, how high is the price of progress?

A former journalist and editor of i-D magazine, Waldron’s first play Forever House was also commissioned by Theatre Royal Plymouth and premiered at the Drum in 2013, while Natives opened to great acclaim at Southwark Playhouse last year.  We spoke to Glenn to find out more about The Here and This and Now.

Your play, The Here and This and Now is coming to Southwark Playhouse, what can you tell us about it?

The Here and This and Now is a dark comedy that explores how we attempt to find happiness in our lives – do we find it in small, mundane, everyday stuff or in the ‘bigger’ moments of our lives? It also looks at lots of random things like workplace culture, how we ‘sell’ ideas to each other and our current (and potentially catastrophic!) over-reliance on antibiotics… did I mention it’s dark?!

Some of it is set at a kind of office away day and, at a certain point a few years ago, I seemed to end up going on one of those every other month – it’s a situation that’s obviously ripe for comic potential but also speaks to our own individual ambitions, goals and dreams. There’s also an understandable tendency right now to feel like literally everything is terrible – even if our own lives are actually quite okay. So I wanted to look at how we make sense of huge global events in relationship to our own small, personal lives and individual quests for happiness. Can I be happy in an age of Trump and Brexit?!

How has the success of Natives earlier this year helped you create new work?

It’s definitely kept me busy! I’m currently working on a few TV projects that have been developed in the wake of Natives. As a show, it received amazing responses – particularly from the young audiences it was targeting. It’s certainly pushed me to be more ambitious and ‘think bigger’ in terms of the kind of work I want to make.

It’s produced by Theatre Royal Plymouth, how have they supported it making it to the stage?

Theatre Royal Plymouth have been incredibly supportive – they were the first ones to really take a chance on my work with my first play Forever House a few years ago. As a theatre, they’re consistently producing new work of an incredible quality and really allow writers the space and support to develop their ideas. The artistic director Simon Stokes and Artistic Associate David Prescott are also not afraid to really push work to make it bolder. It’s an ideal balance of creative freedom and hands-on support when you need it.

Have you met the cast yet? What are you most looking forward to about seeing your characters brought to life?

The show was originally staged in early 2017 in Plymouth and we’ve managed to hold onto most of the original cast – which is fantastic. There’s some really brilliant performances in there. Without giving too much away, the show has quite an unconventional structure so I’m really looking forward to seeing what London audiences make of it!

Do you think audiences will be surprised/learn something new from watching this play?

There’s definitely a few surprises in there – it’s a play that keeps on veering off into new directions just when you think you’ve got a handle on it. It’ll keep you on your toes!