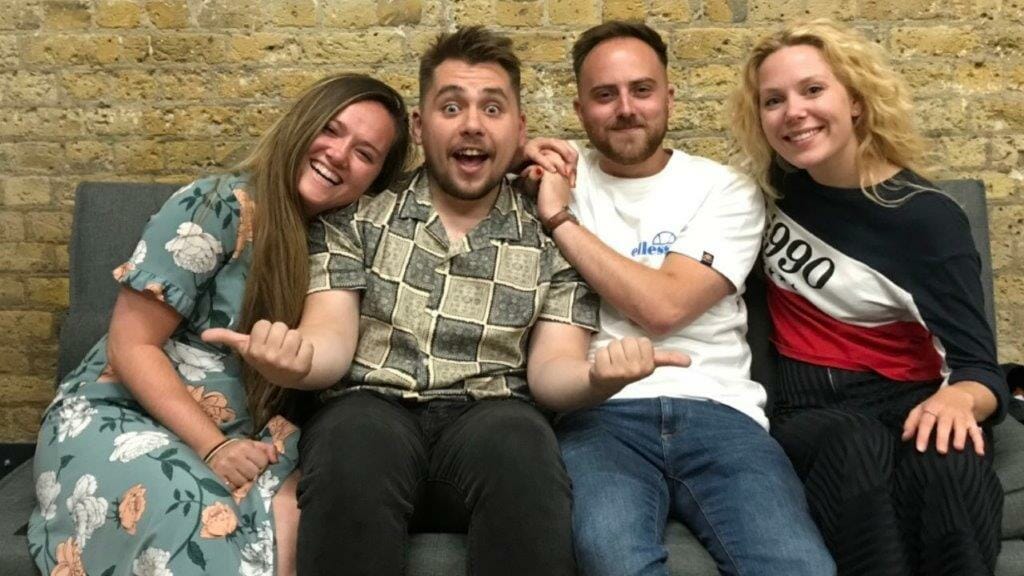 The new academic year means it is time to head back to school as Guildford Fringe Theatre Company presents a raucous production of John Godber’s razor-sharp comedy Teechers, which is directed by Harry Blumenau.

Elle Banstead-Salim and Sam Stay return to the roles of Hobby and Salty respectively, whilst Dannie Harris joins the cast, making her professional debut as Gail.

Following a successful run at Guildford Fringe, the professional production will tour to the Churchill Theatre, Bromley (3 – 8 September) and Swindon Arts Centre (10 September).

You’re directing John Godber’s Teechers, what can you tell us about it?

I am a huge fan of Godber, having directed Teechers once before with Guildford Fringe and also Bouncers.  Teechers is an incredibly fast-paced and hilarious piece. We have the most talented cast we could have wished for. If you’ve not seen Teechers before I’d recommend seeing this production, if I do say so myself!

What first attracted you to this play?

I was wanting to work with Guildford Fringe and as is the norm we started brainstorming shows that might be suitable for the company and also something that I am passionate about. We chatted about loads of plays but we kept coming back to Teechers. The thing with this show is it is so relatable, we’ve all been a student at some point. We have all experienced great teachers and some not so great. I love a show that makes the audience nudge each other in agreement as they remember their school days.

What is it about John Godber’s writing that makes it exciting to direct?

All you need for a Godber play is a strong and imaginative cast and creative team, Godber does the rest. It’s so thrilling directing a piece like this because it is such a collaborative process, and that process is made easier by having such genius text.  Another reason I find it terribly exciting is because it addresses real issues, in this case the class divide being one that really interests me. And that divide is as big now (if not bigger) as it was when Godber wrote the play. It’s important to keep talking about these things.

Have rehearsals been like going back to school for you and the cast?

Everyday’s a school day with this cast!

What do you think this play says about education in this country?

It certainly shines a light on the different educations available depending on your background and social class. It also shows that you don’t have to be at one of ‘the posh schools’ to be inspired by a teacher. As we’ve discussed as a company, we’ve all had exceptional teachers and ones that have stuck with us through our lives.

I think it also reminds us that, whatever your memories, we did really have a good time at school. Sure, sometimes it was hard, sometimes frustrating but for a lot of us it’s where we met our lifelong friends, built our personalities and learnt how to communicate – it was a special place… most of the time.

They are all such strong individual characters, on and off stage. They come into the room with ideas of their own which makes the whole experience more of a conversation rather than me sitting there saying do this, do that. They are a good bunch!

I have had the pleasure of working with Elle once before, on the last production of Teechers. Sam twice, on Teechers and Bouncers. I think a lot of them both, hence why they were asked to come back. From the original cast we lost Lauren due to other performing commitments, she was wonderful. Replacing Lauren though we were lucky enough to cast Dannie Harris. This is Dannie’s first professional job out of drama school and you cannot fake that kind of energy. The piece is new, completely different to the last time. That is what is exhilarating about theatre, the show changes from cast to cast… and this is a good one for sure.

What’s been the most challenging thing about directing this play?

Forgetting what we did last time I guess. We put the show on in Guildford last year with two thirds of the same cast. We wanted this to be a new production and, although challenging I think we’ve done it. As I said, having a new company member makes this easier but for me I have to remind myself to go with it. Nick, Charlotte and I (the complete creative team) were so happy with the last production but you have to let it go to grow something new.

What would you say to anyone thinking of coming to see Teechers?

Do! Come and enjoy a top class piece of Fringe Theatre for not a lot of money. All our venues are small which means you’ll be swept up in the action. You’ll laugh your socks off, as I do every time I watch it.

More information about Teechers directed by Harry Blumenau can be found here.

Review: Imagine This at The Union Theatre