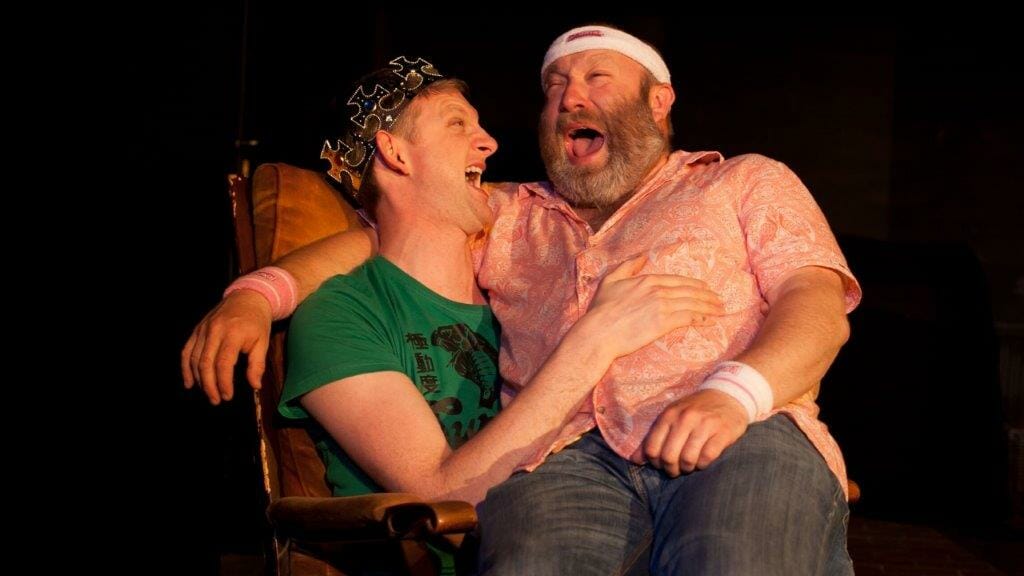 Howard Coggins and Stu McLoughlin star in the acclaimed comedy of many errors and frequent mistakes, The Six Wives of Henry VIII, a lively and absurd journey through the hysterical history of one of England’s most famous Kings and his poor, unfortunate wives.

The Six Wives of Henry VIII is at The King’s Head Theatre 11th February to 7th March 2020.

The Six Wives of Henry VIII is coming to the Kings Head, what can you tell us about it?

The Six Wives of Henry VIII is a silly, hilariously funny, irreverent musical take on the life of Henry VIII and his troubled bedfellows.  There are two of us in the show.  Howard plays Henry, I play all the wives and we both sing a good few songs.  It was the first show we ever made together. We wrote it in 2012. it is surprisingly historically accurate, and it is LOTS of fun. We’ve taken it around the country six times but this is the first time we’ve brought it to London, and the last time we’ll ever do the show. Bitter sweet, you might say.

What inspired you to put this show together?

We (Howard Coggins and Stu Mcloughlin) are two jobbing actors from Bristol. One day, Stu went to see his mum and she insisted on dragging him round Hever Castle. He was trailing glumly through a hallway filled with various portraits of dead kings and nobles when he noticed that Howard is a dead ringer of Henry VIII. He called Howard, with his mum looking pretty disapproving about mobile phones even existing in Rochester Castle, let alone being used, and said without preamble “You are the Living Spit of Henry VIII”. Howard had just finished a long stint filming telly and was missing theatre and said “we should make a show about that”. So, we did. Howard plays the eponymous Tudor Monarch, and Stu plays all the wives.

It’s already enjoyed considerable success, what has surprised you most about the audience reaction?

Some of the jokes are very very rude. We were slightly afraid that people might be squirming around in their seats as we turn the air blue…but no. They have always lapped it up. Which has inspired us, over the years that we have been performing the show, to make it ruder and ruder and ruder. We always think we’re going to push it too far but to our surprise we haven’t gone too far yet. (We recently made the Living Spit version of The Odyssey, with singer Kate Dimbleby, and that was eye-poppingly rude. Through an admin error a massive booking from a very posh school was booked into one theatre we played. It was a large-ish theatre and most of the seats had 14 year olds wearing blazers sitting in them. We only knew they’d be there about 5 mins before ,and assumed that this was going to be a disaster. In fact we got letters from the teacher saying she loved the bawdiness, the kids had had a great night and that they were now working extra hard in their Greek lessons!)

What’s the most challenging thing about staging The Six Wives of Henry VIII?

Playing all six wives is a logistical challenge for me (Stu), especially in an intimate space where there’s nowhere to hide. I get into and out of dresses in an insanely quick time and on at least two occasions I have to play an instrument with one hand while quick changing with the other. But as well as being a challenge that’s also an opportunity: we’ve played theatres of all sizes with this show and the times we have liked best are those when the audience are always going to know exactly what’s going on and we don’t try and hide anything from them – it really makes the audience part of the show (don’t worry – we don’t do any frightening audience interaction). The King’s Head is going to be great for this – it’s up close and personal vibe is perfect for our show.

What are you most looking forward to about bringing it to London and The King’s Head?

Our lazy London friends will, at last, be able to come and see one of our shows. Plus, our agent might come and see what all the fuss is about and finally see why we’re never available any more for telly/commercial jobs. Also, we don’t want to be OTT about this but the King’s Head kinda launched fringe and it’s an honour to play there. It’s the very first pub theatre, with a great entertainment history that we’re proud to be a part of

What would you say to anyone thinking of coming to see The Six Wives of Henry VIII?

This is a unique show that audiences have lapped up all over the country.  It’s got live original music, embroidery, barbie dolls, silly songs, terrible puns and some astoundingly rude jokes. It’s wowed Kneehigh in a field in Cornwall, reduced stony faced Shetlanders to silly giggles and now is coming to London for the first, and only time. It’s a historical, hysterical lesson in cross-dressing Tudor history that you’ll never forget. So, don’t just think about it. In fact, stop thinking about it right now and go book a ticket. You might just laugh your head off.