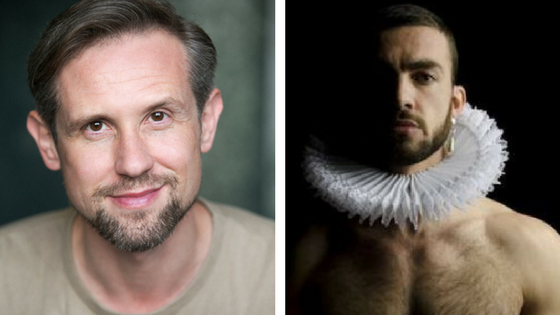 Ian Hallard takes the lead role of William Shakespeare in the world premiere of Matthew Parker’s production of outrageous backstage romp Foul Pages by Robin Hooper, which is coming to The Hope Theatre.  We caught up with Ian to find out more.

You’re starring in Foul Pages at The Hope Theatre, what can you tell us about it?

It’s a new play written by Robin Hooper, who is himself an actor. It’s inspired by the events of 1603, when England’s new king, James I, stayed at the Countess of Pembroke’s home. It’s probable that “As You Like It” was performed here for James, and that, while he was staying with her, the Countess lobbied James not to execute Sir Walter Raleigh.

Robin’s play is a heady mixture of melodrama, comedy and tragedy: pretty much all the characters are plotting and scheming behind the scenes!

How do you take a historical figure like William Shakespeare and make him your own?

The script doesn’t treat him with any more reverence than it does any of the other characters. He’s an actor-manager of a theatre company hoping to ingratiate himself with the new King, and having to cope with the interference of the Countess into the bargain. I’ve just approached him as I would any other role and not worried about all the cultural baggage he brings with him. Of course, we don’t actually know very much about him personally so that’s liberating

Do you think backstage antics have changed much in the last 400 years?

Well what happens in the play is pretty extreme – (spoiler alert!) one of the actors is blinded by having lime wash thrown in his face. I don’t think I’ve ever done a job where someone has deliberately injured someone else. Although, now I come to think of it, I did do a tour many years ago when a couple of the guys ended up having a fist-fight over a girl. There are still friendships, rivalries and romances. Those things don’t change!

How have you and the cast got to know each other during rehearsals?

Well there are nine of us, which is the biggest cast ever to appear at the Hope: so, I do more with some of them than others. Backstage space is limited at the Hope to say the least, so we will be getting to know each other very well over the next month! Some of us have worked with Matthew Parker, our director and the artistic director at the Hope, before, so there’s a sort of shorthand there, and that’s handy.

How does it feel being back performing at The Hope Theatre?

It’s lovely to be back. I can’t quite believe it’s been three years since I was here last with ‘Lovesong of the Electric Bear’. It’s a really intimate space, which can be a bit of a shock at first as there’s no hiding from the audience at all. I’m keeping my clothes on this time though, so I’m not quite as exposed as I was before! It’s particularly convenient for me, as I live just down the road and I can pop home and check on the dogs at lunch times.

Why do you think off-West End venues like The Hope are so important for London theatre as a whole?

They add to the richness of the London theatre scene. For those who can’t afford to see a big West End show, you can pay £12 to see something on the London fringe. Matthew’s done a brilliant job of putting the Hope on the map. He programmes his seasons very carefully, and has a particular interest in new writing, LGBT plays and ensuring his productions have parity of roles for men and women. Plus, everybody who works at the Hope receives the living wage, of which Matthew is rightly proud.

The Kenton Theatre Announce New Performances In Aid Of Their Kenton...