Theatre Weekly
Home Interviews Interview: Nicholas Prasad on Much Ado About Nothing at Rose Theatre Kingston 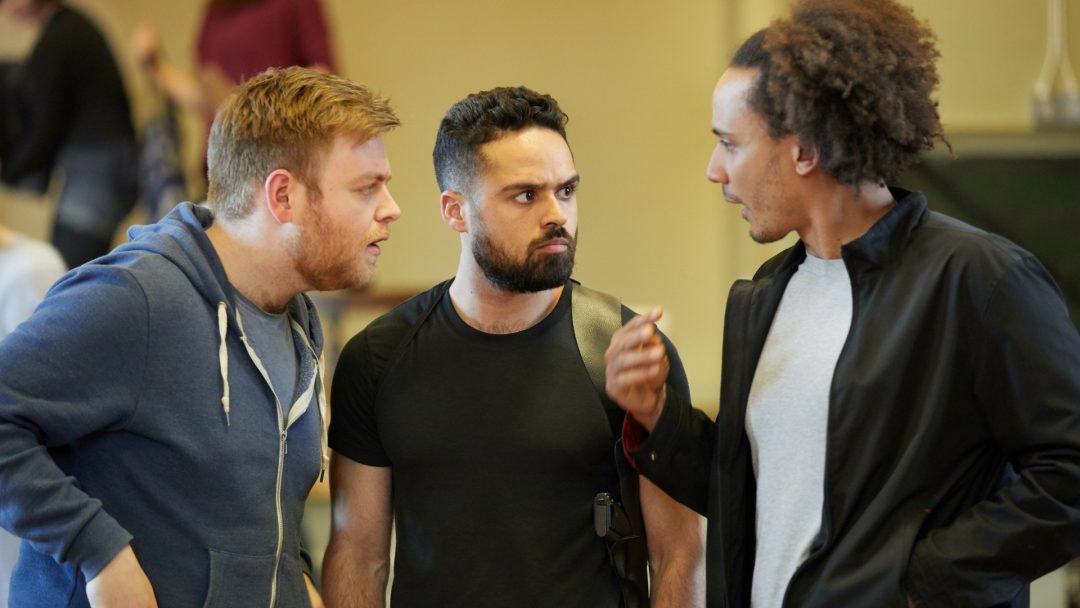 Much Ado About Nothing, starring Mel Giedroyc and John Hopkins opens at Rose Theatre Kingston on 18th April as part of its 10th anniversary year.

Beneath its witty surface, Much Ado About Nothing is a powerful exploration of the struggle for love, identity and self-knowledge in a male-dominated world – as relevant today as ever. The Rose’s production will use Shakespeare’s language in a sharp contemporary setting that not only offers glorious opportunities for physical comedy amid the furnishings of a spa hotel but also provides a social context that enhances the darker themes in this timeless comic gem.

We spoke to Nicholas Prasad, who plays Borachio, to find out more.

You’re playing Borachio in Much Ado About Nothing, what can you tell us about this production of the play?

I can tell you that we’re plunging head first into the Mafia heartland of contemporary Sicily. So where audiences may be less inclined or sympathetic towards a militantly patriarchal society of yesteryear, such themes and dynamics become dangerously relevant and real, especially when dealing with notions of honour, family and loyalty. So, while this might seem heavy on the eye, we’re of course seeking to retain the joy, wit and humour that Much Ado brings. However, in this climate, slander and chatter can prove fatal.

Do you think a contemporary setting helps make Shakespeare more appealing to the audience?

Not necessarily more appealing. I certainly think it allows people to engage with particular subjects and themes in a more accessible way, especially if they struggle to associate or attach themselves to an Elizabethan or Jacobean world of ruffs and pantaloons. It just affords an anchor into a setting and environment that can be related to. However, I’m certainly not encouraging all productions to be staged in such a way. It just so happens a modern Sicily within the world of the Cosa Nostra brings to light the crucial elements of the play in an updated setting. Unfortunately, such concerns Shakespeare had at the time still hold relevance and resonance today.

What was the casting process like? And how did you feel when you got the part?

The casting process wasn’t dissimilar to many others. However, it was thoroughly enjoyable meeting a new time and being afforded the opportunity to treat the audition as if it were the first day of rehearsal. I always prefer and enjoy such an approach. It provides you with the leverage to discuss character, themes and concerns. Play around with scenes, try various approaches. Tap into the music of the piece. It was very assuring to glean a sense of collaboration from Simon and Jon, the musical director, with my own input into creating this very specific world that has its particular style, language, etiquette, fashion and music.

What part of Borachio’s character do you enjoy portraying the most?

I enjoy the fact that Borachio, whilst deeply flawed, is highly ambitious and aspires to better himself socially and within the hierarchy of the ‘family’. He’s a very intelligent and devious character – always fun to play – thinks on the spot, improvises all sorts of schemes and essentially hatches the plan then and there to bring about the undoing of ’the others.’ He can talk his way into trouble but then charm his way out again. However, beneath all that I do sincerely believe he has a heart, though his actions can be callous and selfish. I guess, I would say that of course but he’s in no way inherently bad news. He utilises his skills well to adapt and survive in a hostile and cut-throat world.

How does Borachio compare to other roles you’ve portrayed?

He’s a lot of fun. He’s certainly more mischievous and Machiavellian than let’s say more perfunctory characters I’ve previously played in Shakespeare’s canon. I enjoy playing characters that have a redemptive quality and have a transformation of some kind. It’s easy to see him as quite two dimensional but I think and intend to make him more rounded than that. Simon and I have discussed in length his incentives behind his actions and they make complete sense. I hope I don’t empathise with him too much though. Who doesn’t enjoy playing the bad apple at the party?

What are you looking forward to about working with co-stars, Mel Giedroyc and John Hopkins?

I’m looking forward to working with Mel very much as so far, she’s been an absolute delight. I love her wonderful default of applying humour to almost everything – much needed in the second act when things get a lot darker. She’s fun, approachable, open and an absolutely smashing actress. People might say comedy is her strength but believe me she’s an absolute tour de force when it comes to those gut-wrenching scenes in the latter half. I can’t wait to see her Beatrice and for others to share in her work. This will be my third collaboration with John so I’m delighted to be united with him again on this project. He’s perfect for Benedick and takes to the role with such diligence and ease. I enjoy working with John very much and I really admire his work. I know I’m in a special production when I’m working alongside these two juggernauts.

Much Ado About Nothing is at Rose Theatre Kingston 13th April – 6th May 2018.