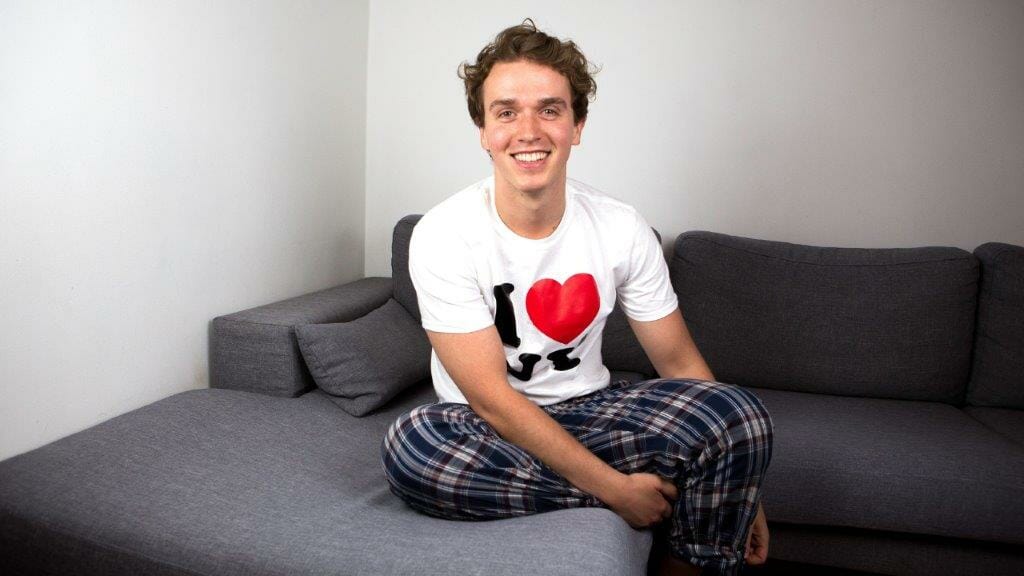 World’s End is the debut play from upcoming writer James Corley; an LGBT love story opening at The King’s Head Theatre which will be the closer of the venue’s ever popular Queer Season. Tom Milligan (who plays Ben) talks about the play, his character and how World’s End compares to his time in Harry Potter and The Cursed Child.

Tom trained at the Royal Conservatoire of Scotland and is best known for his portrayal of James Potter Jr, James Potter Sr and Cedric Diggory in the original West End production of Harry Potter and the Cursed Child, as well as the understudy for Albus Potter.

You’re playing Ben in World’s End at The King’s Head, what can you tell us about it?

World’s End is a new play by James Corley set in 1998 on the World’s End estate in Chelsea. It follows the lives of 4 characters, Ben and Viv who we meet moving into number 11, and Besnik and Yilly who live next door at number 13.

The play is set in a time when Cher was topping the charts and Blair was PM, but also when Section 28 was in place, and the war in Kosovo was escalating. In their own ways, each character is very much at war, and very much in love.

I love that Ben has the most enormous heart but doesn’t quite know how to use it, so he gets it wrong a lot of the time! He‘s damaged goods, which makes him very human and complicated because he feels everything so deeply, but doesn’t have the emotional intelligence or stability to deal with it like an adult. All of that makes him extremely fun and challenging and terrifying to play!!

You were recently in Harry Potter and the Cursed Child, what are you looking forward to most about performing in a more intimate space?

Performing on the Palace Theatre stage was incredible and vast, and you could really feel the energy when all those seats were filled, but for the scale of a production like Harry Potter it was actually extremely intimate. The producers and creative team could have easily decided to sell out arenas with that show, but they decided to keep it “intimate” and allow the audiences to feel special, and part of the magic (wink, wink), which, I guess, is the same at the Kings Head.

A venue like the Kings Head theatre really invites the audience to be involved and invested in these characters’ worlds and feel up close (maybe too close sometimes) to their lives. I’m worried about making accidental eye contact with my mum at some points, but I’ve told her to sit at the back.

It’s set in the late nineties, what’s the most fun thing about being back in the 20th Century for this production?

The rehearsal room trips down memory lane are a joy, and every day someone will be like “Oh my god … do you remember Ferbie’s/B*Witched/Tamagotchi!”

I was a kid in the 90s so I suppose I only was aware of the good bits. But I remember running home to record the latest episode of some Nickelodeon show on VHS, and if you missed the beginning it was the WORST. 90s babies had Sunny Delight, and Turkey Twizzlers and cereal that was JUST chocolate. We really were kids fuelled by sugar. I know it’s healthier and the absolute right thing, but I sometimes feel bad that kids nowadays won’t experience the highs of 80% sugar “fruit” juice.

How have you and the cast been getting to know each other?

There’s only 4 of us, and everyone is so friendly and open, it’s been a breeze to get to know each other. We have done lots of bonding about favourite 90s bangers and we have the mandatory show WhatsApp group where I basically just post gifs of how I feel and ask Mirlind to teach us dances…. he hasn’t yet.

What do you think you have learnt from working with director Harry Mackrill?

I first met Harry when we worked together on The Slaves of Solitude at the Hampstead Theatre, when he was Jonathan Kent’s associate. We got on immediately and after the play there was this feeling of “wouldn’t it be great to work together again on something someday” so I’m ridiculously happy to be working under his direction.

Harry is going to be a hugely successful director; I have no doubt. His mix of unrelenting creativity and positivity is contagious, and he has the vision and authority that makes a respected leader in a room.

I hope he hires me again, because it’s been a dream – I’ve maybe had too much fun.

What would you say to anyone thinking of coming to see World’s End?

COME! BRING YOUR FRIENDS AND YOUR MOTHER!

No, it’s really powerful, and funny and sweet and frightening! It’s all the adjectives.

I’m just really proud to be a part of it, to be honest. There are some stonking performances, James Corley’s writing is world class, and the entire creative team is young and exciting and at the top of their game, so it will 100% be one of those productions in a few years where you’ll say – “well I saw them first at the Kings Head theatre back in 2019.” And who doesn’t love bragging rights?

See Tom Milligan in World’s End will at The King’s Head Theatre from 27th August until 21st September.