Polished performances in step with comic timing and the occasional comedic calamity, make for an exceptionally engaging and entertaining online show – putting quite the spin on traditional Dickens.

A ChristMESS Carol aims to bring audiences together this holiday season, in a shared experience from the cosy, warmth of their own homes as the ghosts of Christmas Past, Present and Yet to Come guide Scrooge through a spiritual journey that will remind us all of the meaning of Christmas…

Open Bar has always relished involving the audience in their shows, and much thought has gone into how this can be continued whilst the performances go digital. Audiences have the option of choosing to throw themselves into playing a character, nominating a friend to be part of the show, or they can just sit back and enjoy.

Christmas is a time for family, friends and chaotic online adaptations of ‘A Christmas Carol’ It will be live, it will be joyous, it will be MESSY

Open Bar are delighted to be continuing their working partnership with Fuller’s Inns.  In a relatively unique example of a corporate company contributing directly towards performing arts productions, Fuller’s  have acted as executive producers, working in collaboration with Open Bar on a number of productions over the past five years. The most recent occurring this summer with a tour of The Tempest – hosted in pub garden across the UK. The backing of the pub chain has allowed the company to produce full-scale professional touring shows even during Covid restrictions.

Now with the implementation of varying tiers meaning that touring is temporarily impractical, Open Bar’s first digital production is produced once again with the support of Fuller’s  Inns. In lieu of providing physical venues and production support, Fuller’s  are continuing their executive producer role, by offering marketing and sales support – thus allowing Open Bar to promise digital audiences their trademark audience interaction, laughs and enough festive spirit to carry you through to New Year.

The show will be sold on a “three tiered” ticketing system, where audiences pay what they can (£10, £20 or £30), and all of the profits will be shared equally between the cast and creatives.

Open Bar Theatre and Fuller’s are also planning a live tour in Spring 2021 when, restrictions permitting, they will be able to get back on to the stage, – further details to be announced. 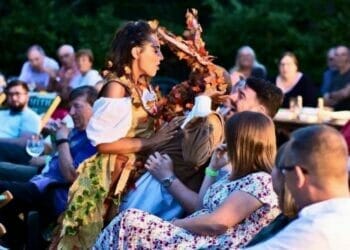