The online showing of Flawstate’s Bored of Knives, filmed in Greenwich Theatre, and written by Kitty Fox Davis and Megan Louise Wilson, who also both perform in the play, was captured in such a way that it evoked for the viewer the intimate atmosphere they would have experienced had they been watching it live.

Bored of Knives starts with the reunion of two childhood friends, who as girls had been suddenly separated when one of them had to move away for safety, because of an incident of abuse. This is the girl who returns, and finds her old friend in the den they created as children. They come to terms with each other, the past, the present, and the future. Both try to imprint their views of what it means to be a woman, and how to be an adult, on the other. As they move between memories, and recreating their favourite childhood activities such as dressing up, they each see the other’s reaction to the past, and who they are as people now.

The seemingly fun returns to their childhood are punctuated with raw revelations to each other of their current situations. The two figures in Bored of Knives are stuck. One is in a cycle of abuse, the other has never grown up, left home, or got a job. To make themselves feel better, they quash the other person’s status, before ultimately realising that they both need help, and they both are valid as people.

Both actors are staggering to watch, because they are fully engaged in changing, responding to, and influencing the other. The holistic performances are charged with layers of subtext that slowly unfold and bring sudden changes in direction and tension. The distinct differences in character are shown in voice quality and body language, and carried through into the costumes. The girl who has stayed all her life in the den wears the colours and textures of the den around her, so she melts into the set. The girl who has been away wears contrasting colours and styles, standing out before she even says or does anything. The set design by Sophia Charap gives a sense of fullness; hangings of textured fabrics, artwork, toys, VHS tapes, and books create nostalgia and engage the senses.

Bored of Knives is a success. Every part of it contributes to create one whole that tells a story and captures the audience. The design, sound, costumes, script and performances are superb because they work so well together. The acting deserves another mention, because it is the jewel in the play’s crown. Both actors are exciting to watch as they pursue their characters needs and wants, skimming around issues and then jumping right in, confronting their childhood and present selves, and facing up to the effect they each have on the other. 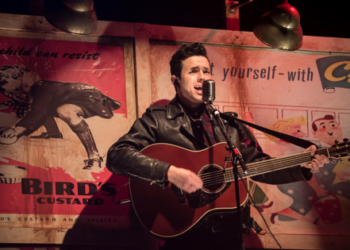