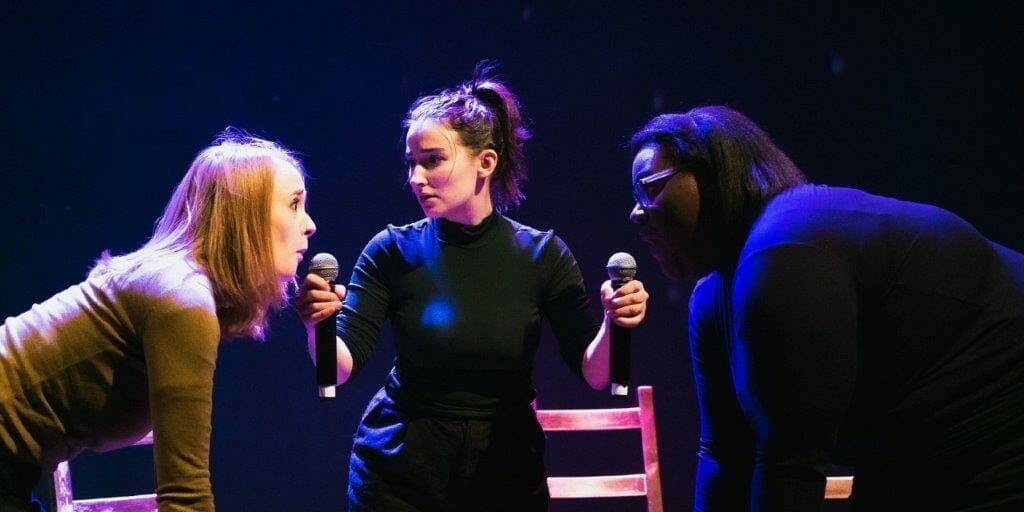 Your Hot Cousin brings their experimental, devised show Don’t Talk To Strangers to the Vaults Festival, relying on audiences going in blind to present a complex message.

The story revolves around a fictional interview with legendary scientists Carl Sagan and Ann Druyun, examining the circumstances behind the launch of their ‘Golden Record;’ a NASA funded project to launch the sounds of humanity into the stars. In keeping with the company’s wish, we won’t say too much more about the content for now… instead, be prepared for some experimental theatre, a powerful soundscape and some very strange turns.

Trying to be as vague as possible, very little actually happens in Don’t Talk To Strangers. Repetition is used in spades as we re-examine elements of the narrative, often branching out into absurd scenarios. One striking moment involved neither Sagan nor Druyun being able to speak or answer the interviewer’s questions, throwing up some interesting thoughts about how we answer for ourselves as a species. The ways in which the cast reinterpret the core narrative is inventive, but the show never quite coheres with the questions it asks.

Very early on in the piece, a joke is made about ‘not having the funding’ for what Don’t Talk To Strangers wanted to present. There’s a sense throughout that there’s something lacking from the design – sometimes a simple set can complement a great play, but here it feels lacking. Every time the show stretches out of its comfort zone and into something exciting, the set feels like it gets in the way.

The sense of something missing extends to the cast as well. Often, you could see the actors visibly pushing to get their point across, rather than giving the audience a bit of credit and letting them make their own minds up about what they were seeing. At the same time, however, it feels like they could’ve taken the ideas further; many times we were hit with interesting concepts, but they tended to be unpolished and presented in a fairly basic manner, yearning for further development. Occasionally, the sense that the actors were unsure of what they were supposed to be doing/saying made it difficult to trust the experimental nature of the show.

One thing they do get right, however, is visuals. One performer in particular snatches attention with her physicality, daring you to look away while she reacts to the events on stage. She’s powerful, she’s moving, and she really makes you question how you should be feeling about what you’re seeing onstage. She weaves a beautifully simple piece of movement which recurs throughout the show, each time presenting a new emotion which really complements each scene. Your Hot Cousin cleverly subverts your expectation of a show about sound to sell you on their wonderful choreography.

It’s hard to judge devised theatre based purely on the presentation, when the process can often be far more important. I certainly found myself thinking about the message of Don’t Talk To Strangers for some time afterwards; I just wish I was able to work out what they wanted me to think about.