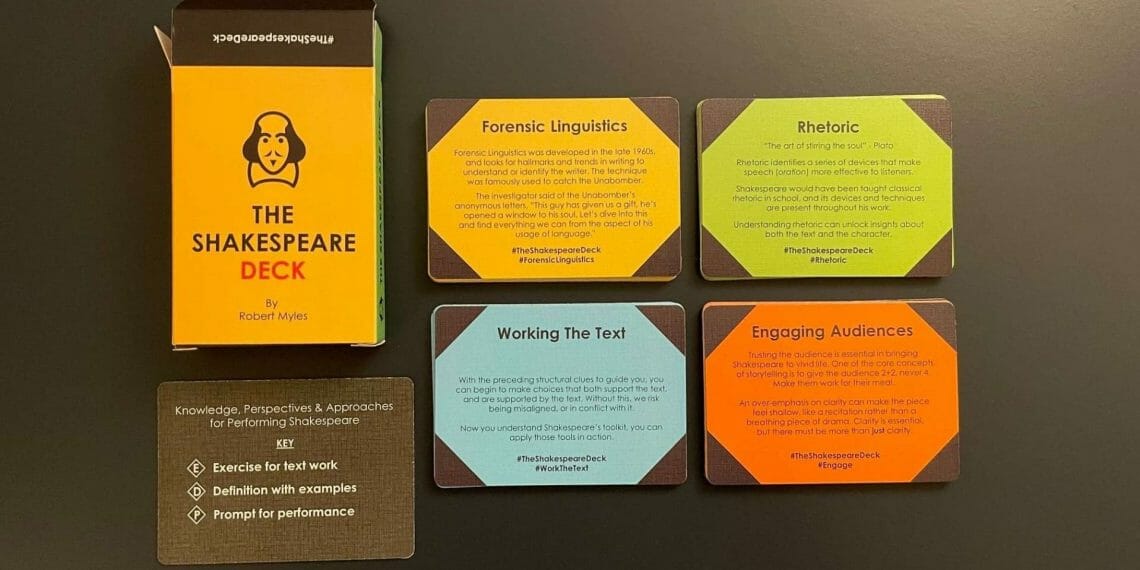 The Shakespeare Deck is a pack of cards that takes actors and creatives on a detailed exploration of Shakespeare’s text, its devices and structures, and offers guidance on how to take these creative opportunities through a broad range of exercises and explorations. It is designed to equip anyone with a pocket-sized utility belt of tools and approaches for getting the most out of their preparation, whether for auditions, rehearsals or performances.

This Second Edition of the powerful, portable textwork tool has been newly revised and expanded with nine new cards, bringing the total to 54 – identical to a typical deck of cards. It features six new definitions with examples, four new exercises for individuals and groups, and three new prompts to keep performers on track. The Second Edition also features a further reading list, improved boxing and artwork, all while keeping the same price point as the original.

The deck is available to purchase now for £14.99 (+P&P) exclusively from the website, and Christmas orders will be fulfilled until Dec 20th in the UK.

To date the deck has been sold in eight countries, and at the Royal Court Bookshop in London. After selling out two full print runs, the newest iteration has been expanded to respond to a significant increase in demand throughout 2021.

Myles said of the launch, “I’m delighted to be able to get this new version of the product out into the world just in time for Christmas. The first Shakespeare Deck has been popular beyond any initial expectations I might have had, and the international reach of The Show Must Go Online has contributed to it becoming a truly global product. Bulk orders from institutions have started to come in as well as individuals buying for both themselves and for their loved ones as gifts. It makes a perfect stocking filler for the Shakespeare geek in your life.”