The current production of The Last Five Years now playing at Southwark Playhouse until 14 November confirms it has been filmed and will be released worldwide over 5 days via new platform stream.theatre.

The production is directed by Jonathan O’Boyle and stars Molly Lynch and Oli Higginson. It is produced by Katy Lipson for Aria Entertainment in association with Edward Prophet and People Entertainment Group

This is one of the only times that Jason Robert Brown’s iconic musical has been recorded and streamed as a full production online. It is also the first full production captured by stream.theatre since their inception in August.

After selling out socially distanced audiences at Southwark Playhouse – including a two-week extension period – this critically acclaimed production of The Last Five Years will now be streamed around the world in order to reach a global audience. All tickets are unlimited and available to purchase for £15 per person/household/device.

The trailer and the performance were captured by stream.theatre, where tickets are available to purchase from today. More info and booking at www.stream.theatre 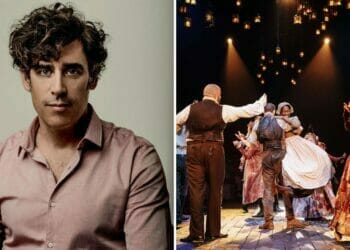