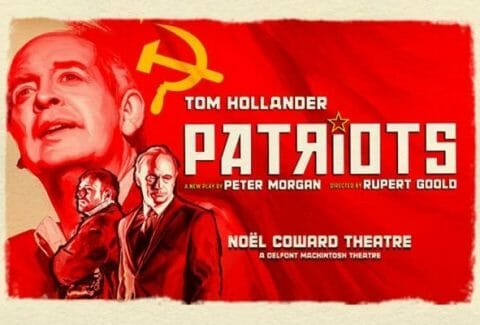 Tickets for Patriots are available to purchase now!

Brought to you by the creator of the critically acclaimed Netflix period drama The Crown, Patriots follows the epic rise and fall of oligarch Boris Berezovsky. This highly anticipated production is set to make its debut at the Noel Coward theatre in 2023. Tickets for Patriots are available to purchase now!

The story of Patriots

“If the politicians cannot save Russia, then we businessmen must. We have not just the responsibility but the duty to become Russian heroes”.

Patriots is set during The Fall of the Soviet Union, a time of tension, uncertainty and disarray. Under the ever-changing regimes of post-Soviet Russia, people are either winners or losers. Within minutes, today’s patriot can become tomorrow’s public enemy number one. Patriots explores the story of billionaire businessman Boris Berezovsky, amidst a new generation of oligarchs that threaten to seize political control. Watch as Berezovsky falls from a position of power and is forced to flee the new political regime of Russia.

The cast and creatives of Patriots

This thrilling political drama is directed by Rupert Goold (Ink, Spring Awakening) and stars BAFTA-winning Tom Hollander (The Night Manager, Travesties) who will reprise his starring role as Berezovsky, with Will Keen (His Dark Materials) also returning to play Putin alongside Luke Thallon as Abramovich. Joining them from the original Almeida cast are Matt Concannon, Ronald Guttman, Sean Kingsley, Paul Kynman and Jessica Temple. Further casting is to be announced in due course.

To witness the ultimate fall from grace within this gripping recount of Berezovsky’s journey, book Patriots tickets today!

Recommended for ages 14+. Under 3s will not be admitted. Under 16s must be accompanied by and sat with an adult aged 18+.

Latecomers may not be admitted until a suitable break in the performance.
No Result
View All Result