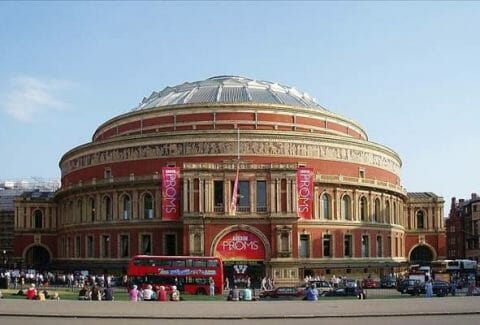 The Royal Albert Hall is an arts venue situated in the Knightsbridge  area of the City of Westminster, London, England, best known for holding the annual summer Proms concerts since 1941.

The Royal Albert Hall is one of the UK's most treasured and distinctive buildings, recognisable the world over. Since its opening by Queen Victoria in 1871, the world's leading artists from every kind of performance genre have appeared on its stage. Each year it hosts more than 350 performances including classical concerts, rock and pop, ballet and opera, tennis, award ceremonies, school and community events, charity performances and lavish banquets.

The Hall was originally supposed to have been called The Central Hall of Arts and Sciences, but the name was changed by Queen Victoria to Royal Albert Hall of Arts and Sciences when laying the foundation stone as a dedication to her deceased husband and consort Prince Albert. It forms the practical part of a national memorial to the Prince Consort – the decorative part is the Albert Memorial directly to the north in Kensington Gardens, now separated from the Hall by the heavy traffic along Kensington Gore.

HISTORY OF THE ROYAL ALBERT HALL

In 1851 the Great Exhibition was held in Hyde Park, London, for which the so-called Crystal Palace was built. The exhibition was a great success and led Prince Albert, the Prince Consort, to propose that a permanent series of facilities be built in the area for the enlightenment of the public. Progress on the scheme was slow and in 1861 Prince Albert died, without having seen his ideas come to fruition. However, a memorial was proposed for Hyde Park, with a Great Hall opposite. The proposal was approved and the site was purchased with some of the profits from the Exhibition. Once the remaining funds had been raised, in April 1867 Queen Victoria signed the Royal Charter of the Corporation of the Hall of Arts and Sciences which was to operate the Hall and on 20 May, laid the foundation stone.

The Royal Albert Hall was designed by Captain Francis Fowke and Major-General Henry Y.D. Scott of the Royal Engineers and built by Lucas Brothers. The designers were heavily influenced by ancient amphitheatres, but had also been exposed to the ideas of Gottfried Semper while he was working at the South Kensington Museum. The recently opened Cirque d'Hiver in Paris was seen in the contemporary press as the design to outdo. The Hall was constructed mainly of Fareham Red brick, with terra cotta block decoration made by Gibbs and Canning Limited of Tamworth. The dome (designed by Rowland Mason Ordish) on top was made of steel and glazed. There was a trial assembly made of the steel framework of the dome in Manchester, then it was taken apart again and transported down to London via horse and cart. When the time came for the supporting structure to be removed from the dome after re-assembly in situ, only volunteers remained on site in case the structure dropped. It did drop – but only by five-eighths of an inch. The Hall was scheduled to be completed by Christmas Day 1870 and the Queen visited a few days beforehand to inspect. She was reported as saying "It looks like the British Constitution".

The official opening ceremony of the Royal Albert Hall was on 29 March 1871. After a welcoming speech by Edward, the Prince of Wales, Queen Victoria was too overcome to speak, so the Prince had to announce that "The Queen declares this Hall is now open". A concert followed, when the Hall's acoustic problems became immediately apparent. These were not properly tackled until 1969 when a series of large fibreglass acoustic diffusing discs (commonly referred to as "mushrooms" or "flying saucers") were installed in the roof to cut down the notorious echo. It used to be said that the hall was the only place where a British composer could be sure of hearing his work twice.

Initially lit by gas (when thousands of gas jets were lit by a special system within 10 seconds), full electric lighting was installed in 1897. During an earlier trial when a partial installation was made, one disgruntled patron wrote to The Times newspaper declaring it to be " a very ghastly and unpleasant innovation".

In 1936, the Hall was the scene of a giant rally celebrating the British Empire, the occasion being the centenary of Joseph Chamberlain's birth.

The Hall has more recently undergone a rolling programme (1996 – 2004) of renovation and development to enable it to meet the demands of the next century of events and performances. Thirty "discrete projects" were undertaken by BDP without disrupting events. Although the exterior of the building is largely unchanged, the south steps leading down to Prince Consort Road were demolished to allow reconstruction of the original underground vehicle access to take modern vehicles. The steps were then reconstructed around a new south porch on the same scale and in the same style as the three pre-existing porches: these works were undertaken by Taylor Woodrow Construction.

The works included a major rebuilding of the great organ, originally built by "Father" Henry Willis, subsequently rebuilt by Harrison & Harrison and most recently rebuilt by Mander Organs; The organ is now again the second largest pipe organ in the British Isles with 9,999 pipes (Liverpool Cathedral has 10,268).