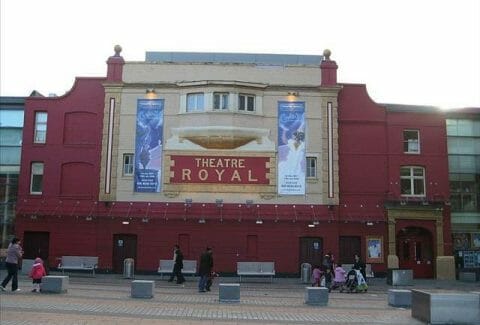 The Theatre Royal Stratford East is a theatre in Stratford, London, which opened in 1884. It is home of the Theatre Workshop company.

The Theatre Royal Stratford East became world famous in the fifties and sixties as the home of the Theatre Workshop company under the direction of Joan Littlewood. Her productions of new shows such as A Taste of Honey, The Hostage and Oh, What a Lovely War brought a much-needed robust spirit to British drama. This tradition of adventurous and occasionally controversial work was maintained at Stratford East throughout the eighties. These artistic aspirations and guiding principles still inform the work of the company today, and are expressed in the Company Mission Statement.

In 1990 Five Guys Named Moe transferred to the West End – the fourth Stratford East production to do so in ten years. In the same year the Theatre Royal was awarded Enhancement Funding by the Arts Council of Great Britain to support the Theatre''s policy of low ticket prices and it received the Prudential Award for Theatre to support new writing development.

The citation for the Prudential Award was as follows:

The Theatre Royal was made famous in the 1950s by the Theatre Workshop Company led by Joan Littlewood and Gerry Raffles. Under the present leadership of Philip Hedley, in a time of restriction and entrenchment of the arts, they have increased their programme, developed an enthusiastic multi-racial audience of every class and age group, and most successfully promoted new writing with particular emphasis on populist, Afro Asian and young people''s work. As well as being World famous for its productions the Theatre Royal has become renowned for its audience, it is probably the only audience in the country which is consistently reviewed!

"Stratford East has one of the liveliest, and most culturally mixed audiences in Britain." Financial Times

"Strapped for cash it may be but the Theatre Royal Stratford East has taken good care to secure its other vital resource. Its unique audience relationship has always been a major asset." The Evening Standard

"If your experience of theatre-going lies in the West End, you hardly know the half of what live theatre can be. The great marvel of the Theatre Royal is its audience, which is harmoniously multi-racial, largely working class and highly appreciative." Financial Times

"The Theatre Royal remains a splendid example of the vitality of the theatre." Evening Standard

"Stratford East audiences are generally marvelous. Indeed, if I was compiling a good audience guide, they would go top of my list." Michael Billington – The Guardian

"Thank heavens for the Theatre Royal." The Observer