On the last Friday of every month, ARTPARTY will present new work – including screenings, live performances, and immersive experiences – from cutting edge creatives from around the world. The eclectic participatory audience experience will include UK and world premieres of work combined with interactive artist interviews, a mix-along cocktail bar, a live DJ set & multimedia dance party and general ridiculousness with host, drag legend and performance artist Virgin X.

Natalie Hall, Co-Founder of Social Convention, says: “ARTPARTY is like taking the Tate Lates programme and sticking it in The Glory. It’s high art and low art, we don’t take ourselves too seriously. What we promise is that you can come to see some completely new creative work but also have a bit of a laugh, hop up on stage with the host, flirt in the chats with other arty types, and have a good sweaty dance sesh”.

She continues, “Our initial idea for ARTPARTY was born out of a rather heavy pub night with Cimoen [Cimeon Ellerton-Kay, Social Convention Co-Founder] where we wondered, why is it that we LOVE new theatre, dance, art, whatever – but so often just end up at the pub? We work in the arts and are the target market for so many arts experiences – why is it so hard to get us there? We were frustrated and bored with the restrictions and ostentation and wine in plastic cups. Our hope is this offers people like us the chance to enjoy new and exciting art in an active, unpretentious way whilst also enjoying a ‘night out’ with like-minded people.”

ARTPARTY launches on the 26 February as Experimental Opera Director Alexander Gedeon steps into the spotlight with Concerto for Having Fun with Elvis on Stage, a new theatrical piece designed for video, composed by Daniel Corral and created with Video Director Allen Cordell of cult comedy site SuperDeluxe. Concerto was created around a cult 1973 album of Elvis speaking on stage between songs at live concerts. One reviewer wrote: “hearing it is like witnessing a car wreck, leaving onlookers too horrified and too baffled to turn away.”

Concerto is a reimagining of this vilified recording where Corral’s live musical score is performed along with the original LP as if they were the pit orchestra for opera or musical theater, while Gedeon’s “Elvis” persona becomes a vehicle to explore all things banal and absurd in pop idolatry, race and representation in music, as well as the performative aspects of ‘stage presence.’ First premiered at REDCAT Los Angeles in November 2020, this is the UK premiere of this bizarrely beautiful piece and not to be missed.

April will celebrate the work of Leonie Rae Gasson – a Glasgow-based Queer artist creating innovative digital and live performance work, with a premiere of her new immersive audio theatre work Can You Hear Me?, a deeply intimate experience for two audience members exploring the complexities of distance and nostalgia, as Leonie cleverly pushes the boundaries of immersivity.

In May, participants can look forward to spending time with groundbreaking composer, electronic music artist, and performer Dan Samsa with a live 360 audio premiere of his new album Contours. Samsa is an eclectic upcoming composer combining the technique and rigour of classical training, with the popular electronic music of South East London.

With a full year of programing to be announced,  ARTPARTY promises to offer something truly unique to arts lovers around the world who don’t take themselves too seriously. As Natalie confirms “If you’re sat at home craving live music and theatre; something fresh and provoking and a whole load of fun to share with friends, this is for you. Get your art fix but also pop some glitter on and dance with us. Everything goes.” 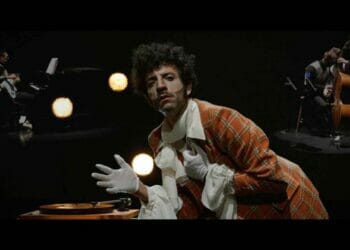