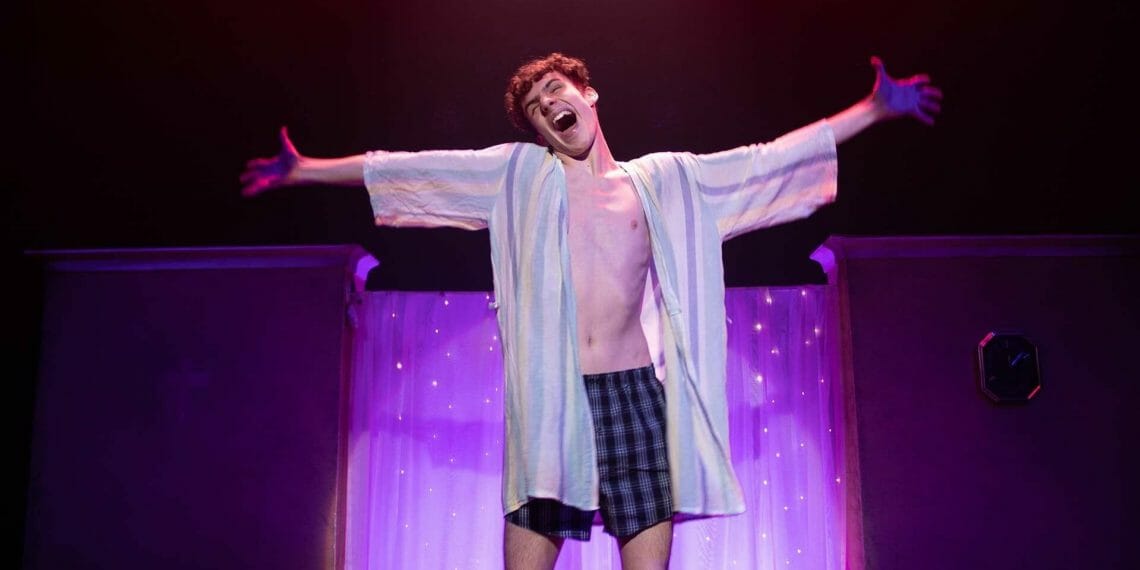 Jesus Jane Mother and Me courtesy of the Company

It can sometimes be surprising to find out that people you thought you knew well are actually superfans of something that seems completely incongruous to their personality.  Philip Stokes’ play Jesus, Jane, Mother & Me is a compelling look at what drives people to devote their lives to unlikely idols.

This solo performance introduces us to Daniel Valentine, he’s just turned 18 and stands in the living room of a home that looks abandoned.  The first thing that strikes you about Daniel is the accent, it’s more Oxbridge than Huddersfield, but then this isn’t the only flamboyant trait our protagonist possesses.

Stokes’ script gently brings the audience up to speed on Daniel’s story, his mother, to whom he is devoted, hasn’t exactly been the ideal parental figure, and it’s fallen to a Reverend to act as a father figure, and the church to provide some stability to Daniel’s upbringing.

Jesus is Daniel’s first love, but the Jane in the title refers to the Northern songstress with a passion for cruising.  Daniel’s mother is also a Jane McDonald superfan, going to extraordinary lengths, including keeping her son off school, to devote her life to following Jane.

It’s not been a happy upbringing for Daniel, but he’s so wrapped up in these three aspects of his life that he doesn’t see it.  It’s both comical and heartbreaking to see this young man completely oblivious to the torment he has faced, and while his flamboyancy is endearing, it hides something much darker.

This is a beautifully written and exceptionally clever play that leads its audience on an odyssey of discovery, every line in Jesus, Jane, Mother & Me serves a very specific purpose, and is preparing us for the shocking and devastating climax.

In the role of Daniel, Jack Stokes give a true tour-de-force performance that has the audience gripped from start to finish.  This is an exposing play, but Stokes grabs it with both hands and engages with it fully, it’s impossible not to feel drawn to Daniel through Stokes’ captivating performance.

Jesus, Jane, Mother & Me delivers so much in its seventy minute running time, that you’re left feeling somewhat exhausted by the experience, but at the same time exhilarated for having witnessed an incredible actor performing a superb play.