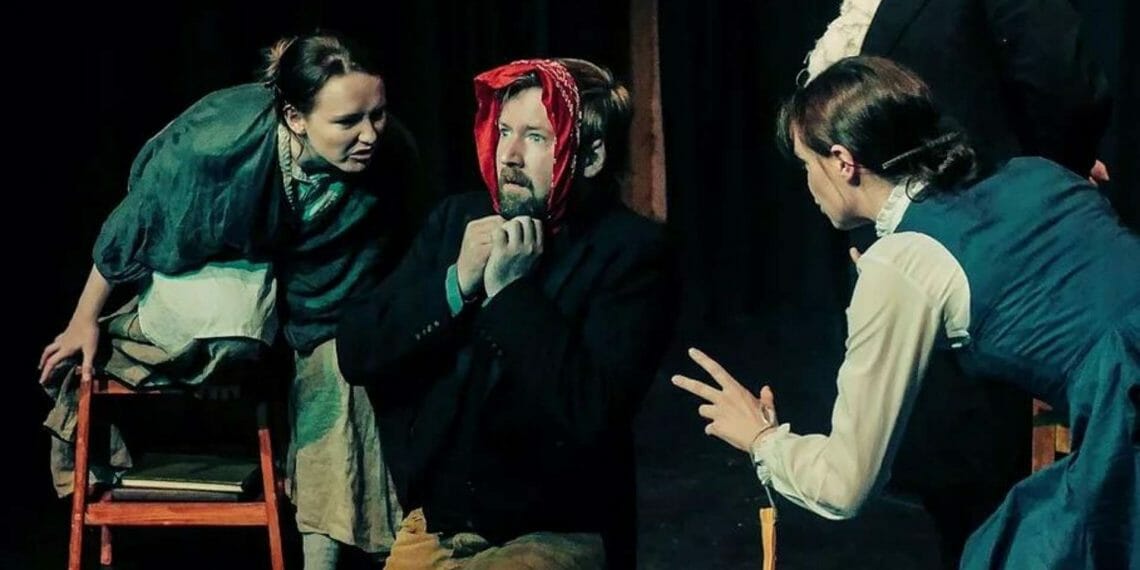 As if the fairy tales of the Brothers Grimm are not bleak enough, the history of their creation carries a dark, neglected history. Originally created for the Edinburgh Horror Festival in 2017, Some Kind of Theatre’s The Grandmothers Grimm returns to the Edinburgh Fringe Festival to share the forgotten story of the women behind the tales.

Written and co-directed by Emily Ingram with Rho Chung as stage manager and dramaturg, the show covers much more than stolen authorship, bringing a fascinating, feminist, and highly polished production to Greenside @ Riddles Court (Thistle Theatre).

In 1812, Marie Hassenpflug sneaks out of her family home to help Wilhelm and Jacob Grimm create an anthology of tales with hopes to preserve the stories of families and unify the nation. As Wilhelm and Jacob’s true intentions become clear, however, the female contributors are erased from the record.

The meticulously informed show alternates between enacting history and narrating the Brothers Grimm tales. Whilst the history is informative, it equally raises questions that haunt the present day, especially those concerning feminism, labour, cultural appropriation, and national identity. The storytelling is conducted with unwavering vigour and a resourceful selection of effects, allowing the gruesome tales to be told in the most delightful way possible.

There is humour in the show, but it is generally quite light. The joke of a grown man speaking in the high-pitched voice of a young girl is repeated a few times too many, but The Grandmothers Grimm is an enchanting story even without side-splitting punchlines. The well-rounded cast channel the fun, sinister, grotesque and vulnerable moments with total conviction, and the heightened way in which the tales are told in no way compromises the sincerity of the production.

Jenny Quinn delivers a resonating performance as the imaginative and principled Marie Hassenpflug. Gerry Kielty and Justin Skelton portray Wilhelm and Jacob Grimm as charming yet morally corrupt, sharing a convincing brotherly relationship. Writer Emily Ingram joins the cast as various characters and an ensemble member, and it is evident that the whole team share a clear vision of what this show is about.

Simply put, The Grandmothers Grimm takes a great idea and turns it into a great show. The production exposes the truth behind the Brothers Grimm stories, and while there are no weak damsels in distress, there are a couple of wolves.