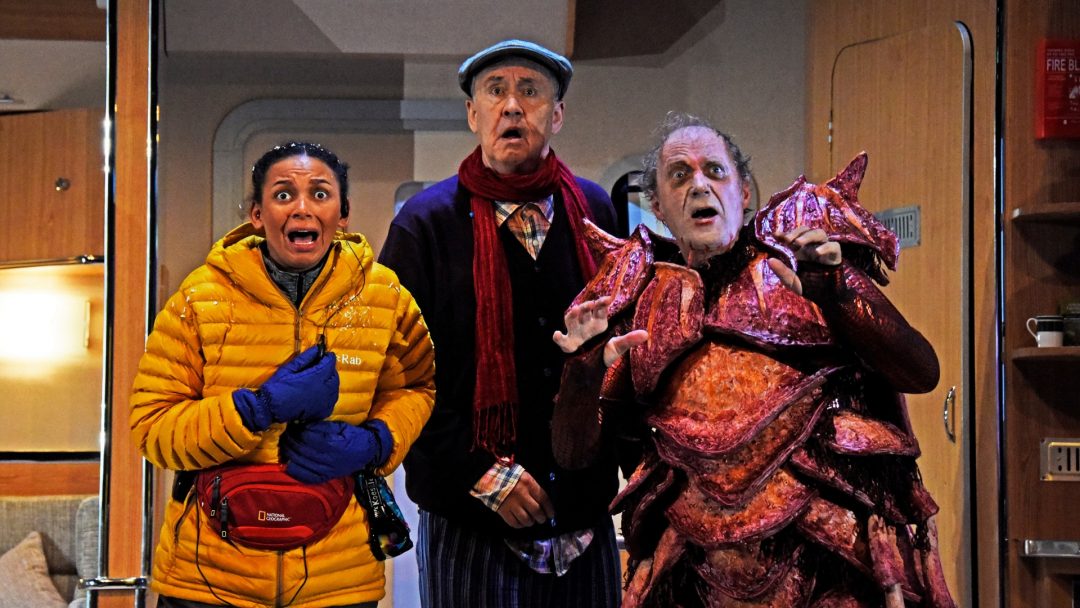 Production images are today released for the world premiere of Vulcan 7, a new comedy written by and co-starring Adrian Edmondson and Nigel Planer, well known for the BRIT award-winning cult classic The Young Ones and The Comic Strip Presents… The cast is completed by Lois Chimimba (Common, wonder.land) with Steven Marmion directing. Vulcan 7 is currently at Guildford’s Yvonne Arnaud Theatre until Saturday 29 September and will then visit Cambridge, Newcastle, Bath, Richmond, Malvern and Edinburgh through to Saturday 10 November.

Vulcan 7 reunites British actor-comedians Adrian Edmondson and Nigel Planer who rose to fame in ‘80s TV sitcoms The Comic Strip Presents… and the The Young Ones and who went on to appear together in Filthy, Rich and Catflap and in the spoof band Bad News. They last performed together in 2000 for A Comic Strip Presents – Four Men in a Car and Four Men in a Plane and last wrote together on The Young Ones tour in 1982. In their new comedy Vulcan 7 they star as former drama students with Lois Chimimba as a young film runner who must mediate between the pair.

Gary Savage and Hugh Delavois were students at RADA together. Now in their sixties, they meet in an Icelandic wasteland, on the set of a fantasy movie. Hugh has had a plodding career but has landed the small but regular role of Vulcan’s butler and he’s making his seventh film for the franchise. Gary is a one-time Hollywood A-lister who has fallen on lean times, and is playing a guest monster with four hours in make-up and one word in the script.

Sparks fly inside the trailer as old wounds are opened. Leela, a runner, attempts to keep the peace between them, but outside the trailer things are not going to plan either: the director’s gone AWOL, the catering truck’s on the wrong side of a ravine, and the volcanic activity is growing more and more lively by the minute…

First Look: The Boy Friend at The Menier Chocolate Factory in Rehearsal

Full Casting Announced for Three Sisters at The Almeida