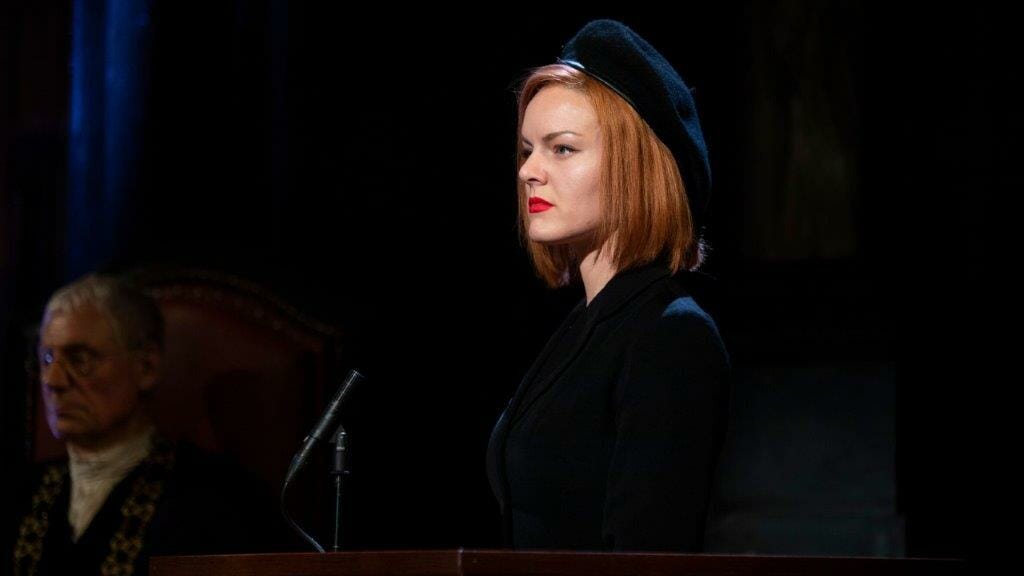 Alexandra Guelff joins the cast of Witness For The Prosecution as the production celebrates its 2nd birthday at London’s County Hall.  Playing the role of Romaine Vole, Alexandra was part of the prginal cast, and now returns to play the female lead.

As the production enters its 3rd year in the iconic London venue, over 260,000 people have borne witness to this gripping courtroom drama and the case of Leonard Vole, accused of murder in cold blood. The twists and turns of the case are played out as prosecution battles defence and witnesses take the stand to give their shocking testimonies.

You’re starring in Witness for The Prosecution at County Hall, what can you tell us about it?

It’s a brilliant courtroom thriller, set in London in 1952: a wealthy woman has been murdered, and a charming young man arrested for the crime. I play his new German wife Romaine, who is then called as a witness by the prosecution.

You were part of the original production, what’s it like coming back, and this time as the female lead?

I’ve never come back to a show before, but there was no way I’d pass up the chance to play Romaine, she’s dynamite. It’s fascinating to see how the show has evolved and how casting different actors changes the dynamic between characters. We are lucky to have a wonderful director in Lucy Bailey who gave us tremendous freedom to make the roles our own.

You’re known for TV roles, how have you found coming back to the theatre?

There’s nothing quite as satisfying as theatre. I absolutely live for the gasps and whispers of our audiences as the plot twists and turns. Because we perform in the extraordinarily atmospheric central chamber of County Hall, it feels more like a film set than a theatre, so we get the best of both worlds.

What’s do you like most about the character of Romaine Vole?

Ooh I can’t tell you! She’s all spoilers! I will say it’s a joy to play someone so quick-witted and wry. She takes great pleasure in running rings around her opponents, but she’s tremendously vulnerable and human too.

Why do you think Agatha Christie’s work remains so popular today?

She’s just a genius when it comes to plot. Everything is so elegantly constructed, like an intricate puzzle. I am always pleasantly surprised by how funny her work is too, it’s full of dry British humour.

What’s been the biggest surprise to you in performing in a non-traditional theatre setting?

The sense of sober authority in that room is quite something. There are names etched into the marble stretching back over a hundred years and you can sense that history in the leather and stone. It gives the play a legacy of justice and debate.

What would you say to anyone thinking of coming to see Witness for The Prosecution?

The same advice I’d give to anyone on a jury: pay close attention and always question your assumptions…

Witness for the Prosecution, now in its third year, is on at London County Hall, currently booking until 13 September 2020.  Tickets are on sale here.

First Look: The 2019 Cast of Witness for The Prosecution

Interview: Lewis Cope on Joining the Third Year Cast of Agatha Christie’s Witness for the Prosecution