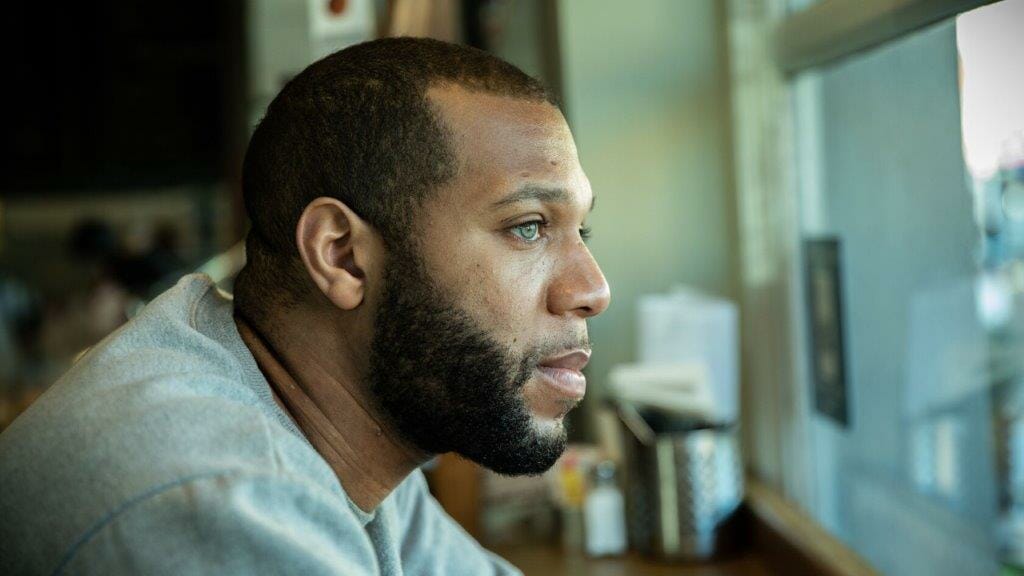 After a sold-out run of his debut play, 32 Peak Street during Camden Fringe in 2018, Corey Bovell now brings his edgy and moving one-man play Chicken Burger and Chips to the Brockley Jack Studio Theatre from Tuesday 10 until Saturday 14 March 2020 a venue just a stone’s throw away from the streets, estates and takeaways of South East London at the heart of the drama.

“The world wasn’t designed for us to succeed playboy, you gotta clock that we’re living in an uneven society.”

You’re bringing Chicken Burger and Chips to Brockley Jack Studio, what can you tell us about it?

I feel honoured to be able to tell this story in a theatre so close to home, to where I grew up.

Chicken Burger and Chips is my tribute to Lewisham borough during my adolescent years – 2009. It deals with relationships, gentrification and knife crime, but it’s not all doom and gloom! Ultimately, it’s a story about a young person at a crossroads in his life, seeing his world transform around him.

I was inspired by the work of Michaela Coel, who wrote and performed her one-woman show Chewing Gum Dreams at the National Theatre in 2014. After seeing that, it sparked an idea in my mind to create a play that could reflect aspects of my life.

Did anything surprise you about this play as you were writing it?

I was surprised with how far I was able to go, and how vulnerable I could allow myself to be.

Why was it important to you that you performed the play you had written yourself?

This story was so personal to me, and the connection so deep, I really wanted to be the first person to perform my work. Just like Michaela Coel Chewing Gum Dreams, Arinzé Kene Misty, Ambreen Razia Diary of a Hounslow Girl and Sherine Chalhie Hijabi Matters.

What do you hope director, Kwame Asiedu, will bring to the play?

I’m excited to have Kwame on board! He brings experience, enthusiasm and tenacity to this project. The dynamic range of movement in his previous plays was just one of the many skills that attracted me to him.

What would you say to anyone thinking of coming to see Chicken Burger and Chips?

They’ve never seen a play like this told by a fresh voice from Lewisham. Don’t think, do it! Tickets are available from www.brockleyjack.co.uk.