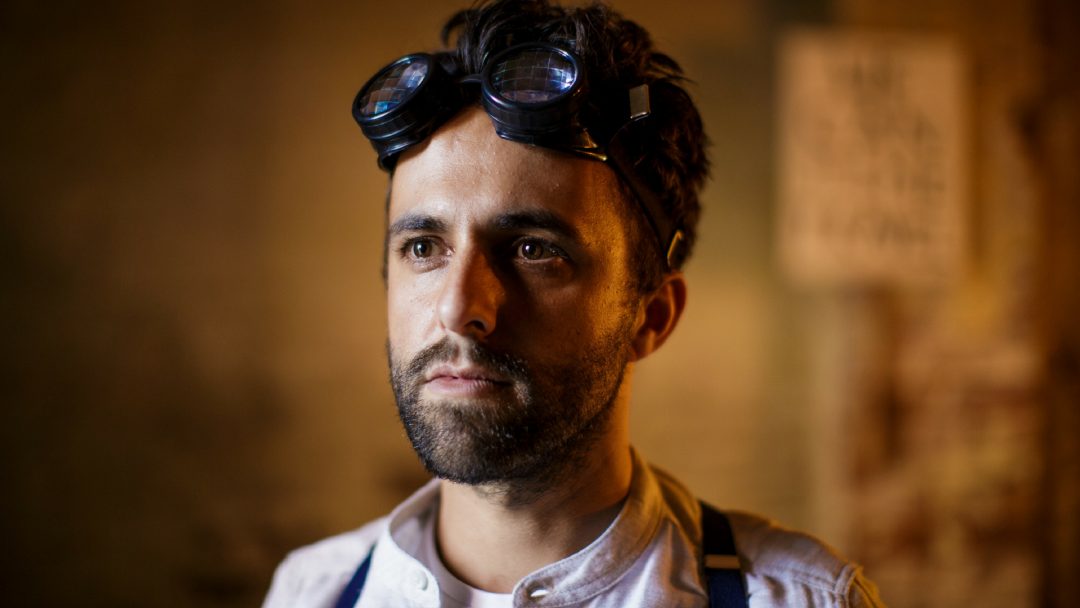 Dom Coyote is a composer, performer and writer of songs based in Bristol. His most recent show, Songs for the End of the World, won the Vault Festival Origins Award for Outstanding achievement, and he most recently appeared in Kneehigh’s Tin Drum. His work includes composing and performing for Old Vic, Royal Shakespeare Company, National Theatre, Art Angel, Cirque Bijou and Battersea Arts Centre. He is an Associate Artist with Kneehigh Theatre and Musical Director of Bristol based Extraordinary Bodies.

We caught up with Dom to find out more about We Can Time Travel.

Your lyrical new work, We Can Time Travel, is coming to Shoreditch Town Hall, what can you tell us about it?

We Can Time Travel is a theatrical, time travelling odyssey full to the brim with music. It’s a gig and it’s a story. A story for anyone who can let their imagination run wild. A story about time. How complicated it is. It’s about memory, about loss and about hope. There are some pretty damn good gags in there too.

It’s just me on stage with lots of instruments. I’ve been an artist with Kneehigh Theatre for a long time, and they instilled in me the natural balance of music and storytelling.

Where did you get the inspiration for We Can Time Travel from?

When Trump got into power, I was on tour with a show, my relationship at the time was in trouble, everything was up in the air. My world was tumbling into the unknown. I wanted to make something immediate. About now, about how to cope with turbulent times. I rang my friend Rich Rusk, the most brilliant director I know, and told him I wanted to make something new. He suggested The Time Machine by HG Wells. It felt perfect. The idea of going back in time and changing past events, or tumbling forward to see what might become of us was hugely appealing. our imaginations got fired up and the Time Machine became the springboard to We Can Time Travel.

Why does mixing storytelling and music work so well?

Music and storytelling come from the same place. From sitting round the fire on long dark nights, for thousands and thousands of years. We would dance, we would sing we would play and we would tell stories. Storytelling and music have always been part of the same family. One lights up the other. It’s a modern concept to split art forms up into different categories.

How would you describe the musical style in We Can Time Travel?

Well it is full to the brim with songs and synthesisers. There’s a big dollop of Kate Bush in there. She’s a huge inspiration. So is Bowie. It has a flavour of 1980’s alternative pop. But it’s very contemporary. I’m a big fan of electronic music such as Four Set and Apex Twin, and also Bjork and Alt J. I don’t think it sounds like any of these legends, it sounds like me, but you can hear their inspiration in my music.

Your last show, Songs for the End of the World won a Vault Festival Origins Award, did that inspire you to write more?

Absolutely! I was really proud of Songs and the team that made it with me. I’ve been making stories and music since I was a kid, but it took me a long time to work out how to connect them. Songs taught me how to do this. How to make gig-theatre. After that discovery, I was desperate to make more.

If you could time travel yourself, where and when would you go?

That is such a hard question. I think I would either travel way back in time to find the druids (I am a hippy at heart) or way way way into the future to satisfy my inner geek.  I’m a total sci-fi nerd. There, I said it.

We Can Time Travel is on tour at the following locations:

New Voices Theatre Announces Cirque Viola For One Night Only At...