“For me theatre is the most powerful of arts but mixing it with the other artistic genres I do extend the contextual field. Films, music, animation all those elements allow me to tell a story on different levels”

Inna Dulerayn is the writer and director of Mythosphere, a boldly ambitious international collaboration between Russia and the UK.

This highly innovative multi-media production will open at Stone Nest, Shaftesbury Avenue on Monday 20 September and will run until Saturday 9 October 2021.  Tickets are on sale here.

Inspired by the writings of surrealist Leonora Carrington and fantasy writer Diana Wynne Jones, Mythosphere treads the dark path of the fairy tale forest that lies in the shadows of our imagination and the unexplored depths of our unconscious in this dazzling story of magic – the magic we have lost and the magic that is a forgotten part of our nature.

Your new show, Mythosphere, is coming to Stone Nest, what can you tell us about it?

Mythosphere is a multimedia theatre performance about magic which has lots of elements: contemporary opera, live music performance, theatre performance, dance, film, animation. The show also has a site-specific element: it opens in the magical space of the old Welsh Chapel on the dates of the Celtic autumn equinox festival Mabon.

This show was created by many amazing professionals from different countries. The videos were filmed in Russia and in the UK in collaboration with Russian and British artists Elena Muchnaya and Sasha Dulerayn; the 3D animation was created by Masha Yukhananov and Svyatoslav Zaytsev in New York. The costumes were made by Anna Smirnova in Moscow. The Management team of Gary Beestone Associates helps bring it all to life here in London.

Mythosphere to Open at Stone Nest

What first inspired you to create Mythosphere?

The first idea of Mythosphere came from my admiration of surrealist artist Leonora Carrington, her amazing art, her novel The Hearing Trumpet, her absolutely extraordinary life and her memories about her experiences during her time in a mental hospital.

Running away from the secure and stable life set up for her by her rich family in Britain, Carrington was a rebel exploring the Multiverse of the magical and spiritual realms. From her childhood when her grandmother, whose name was Moorhead informed her that she directly descended from Tuatha de Danaan, one of the great ancient tribes of Ireland which has spawned a rich tapestry of wonderful Irish myths to her 90s when she became an expert of the Mexican traditions of magic.

Everything in her life was a subject for me to explore and investigate, and this investigation has brought me to the story of Mythosphere.

Why did you want to blend audio visual, live performance and music for this production?

Maybe it’s my personal style of making theatre, I always mix the different genres, music, video, and live performance. My previous show combined elements of TV show, video installation and theatre.  In Russia, I have worked in drama theatre, I have also made a few contemporary opera performances, and I worked for ten years on TV and made my own independent films.

For me theatre is the most powerful of arts but mixing it with the other artistic genres I do extend the contextual field. Films, music, animation all those elements allow me to tell a story on different levels not only as a linear story but also a myth.

In this way, telling the story of the girl and old woman with magic abilities thanks to music and the video becomes more than the human story, it becomes a Myth about Divine Feminine, more than that it becomes a new vision of the Earth as a spiritual entity. I want to say a special word about our brilliant light designer Jackie Shemesh and his team, who work very hard to find the right light for this multi-layered interdisciplinary show.

Tell us more about the musicians; the role they play and about their instruments?

We have two composers in this show Iraida Yusupova and Alexey Nadzharov. Iraida wrote beautiful vocal pieces, including solos for very rare voices contra tenor and contralto. Alexey is a genius of soundscapes and strange noises.

When we started to discuss what kind of music should be in Mythosphere, Alex was confident that it should be a live music performance and he started to create the sound objects for our show. The acoustics of the Welsh Chapel and magic abilities of our sound and video designer Maksym Demydenko allow all soundscapes to become real adventures. Now about the musicians: we have an amazing cast, they are all amazing actors and singers and now they have been learning how to play on those sound objects to create magical squiggly soundscapes imagined and created by Alexey.

What’s been the biggest challenge for you in bringing the show to life?

We live in a challenging time, people are physically becoming much more separated from each other than before: the simple things like visiting your family in a different country or making a party for your friends now can meet lots of obstacles.

Making theatre in the situation of the pandemic sometimes feels like “mission impossible”.  My project includes professionals from different countries Russia, UK, Ukraine, USA and Germany. Our actors are from France, Italy, Poland, Hong Kong, Greece, Chile, Russia and the UK. We cross the borders, we come together, we work, we trust that everything will be fine, and that the Universe is helping us. This trust is the biggest challenge but also the source of big inspiration. Because when something which looks impossible finds magical ways to come to life, you really become a believer.

What would you say to anyone thinking of coming to see Mythosphere?

This project is a journey for all creators. In this journey we are discovering not only new theatre language, but also new ways of communication between different art genres. We are creating new myths about the Earth, about humanity, about feminism, mental health and spirituality. Please come to join this journey and maybe you will discover something new for yourself. 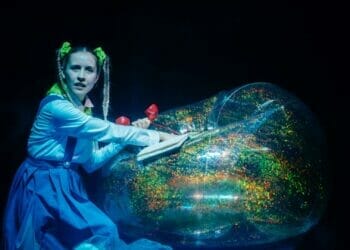 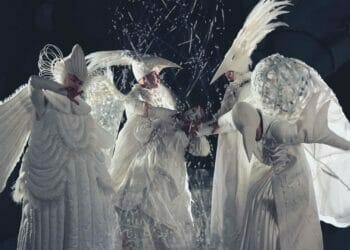 Mythosphere to Open at Stone Nest