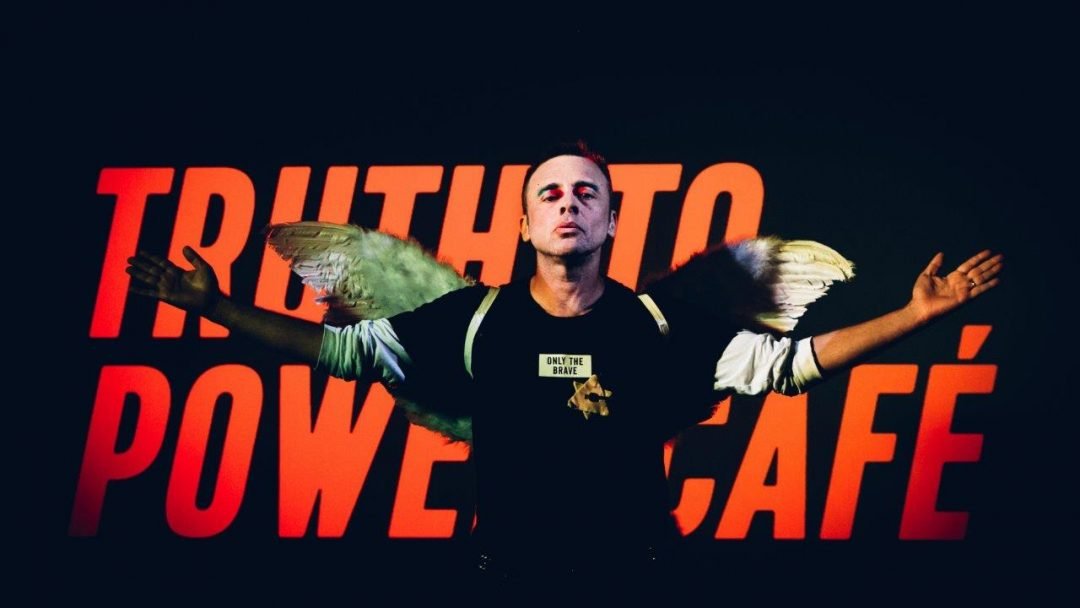 Award winning theatre-maker Jeremy Goldstein has a question that impacts on all of our lives, crossing from the personal to the political and provoking a multitude of responses: ‘Who has power over you and what do you want to say to them?’

Now, Jeremy Goldstein embarks on a national tour posing this question across the land, in his acclaimed theatre show Truth to Power Café.

Tour dates can be found here.

You’re touring Truth to Power Café, what can you tell us about it?

‘Truth to Power Café’ is an hour long performance event, during which we invite the public of all experiences and backgrounds to respond to the question ‘who has power over you and what do you want to say to them?’

I’m cast as a participant in the show, performing monologues and poetry intercut with music and image, which bookend up to ten participants per night.  My monologues are a constant but we have different participants every night, so no single performance is ever the same.

I talk about my father Mick Goldstein as the person who had power over me. Mick was a member of the Hackney Gang, a group of six friends that included Harold Pinter and Henry Woolf.

To date we’ve had nearly two hundred participants taking part in four countries speaking up on a whole range of topics from familial relationships to advertising, money, war, HIV and homelessness.

What inspired you to create this kind of show?

Life. When my father died in 2014, I read in his obituary, his belief in speaking truth to power and the importance of an independent media. This prompted me to visit the Harold Pinter Archive at the British Library in London where I was able to read private correspondence between Harold, Henry and Mick for the first time, as it’s all on public record now.

It was through these letters, some of which were written in the 1950’s, that I got to know my father as a young man – the man I never knew. My father and I had a very difficult relationship so reading the letters had a profound effect on me, so much so that it enabled me to reconcile my relationship with my father even after he died. I learnt that the dead live on inside of us.

At the same time I contacted Henry Woolf who is now 89.  As well as a great friend, Henry is a legendary poet, actor, and director.  Henry and I would talk for hours about his friendships with my father and Harold.  He ended up contributing series of memory poems, one of which I’ve set to a deep house dance beat, and all of whom I perform as the real-life son of the Hackney Gang.

Tell us more about the influence of Harold Pinter and his Hackney Gang?

As young boys my father Mick Goldstein and Henry Woolf were evacuated from London during the Blitz.  Henry and Mick were sent to live in Upwell near Lincoln and Harold was sent to Cornwell. After the war they grew up within 100 yards of each other in East London and remained friends for 60 years.  Their formative Hackney days were captured in Pinter’s one and only novel The Dwarfs, which he wrote between 1952 and 1956.  Harold based the central character of Len on Mick; and Henry directed Pinter’s first play The Room in 1957 as well performing in it as the original Mr Kidd.  Before that in 1955, the three of them saw the first performances of ‘Waiting for Godot’ at the Arts Theatre in London.  It’s their sense of loyalty, friendship, and desire to hold on to what you know, which inspires me the most.  I’m glad to keep their memory alive through the show.

Why do you think Truth to Power Café is such an important piece of theatre in the current climate?

Partly the reason I created the show was to be heard. After 30 years working in the arts, I didn’t feel I had a voice in society, so I wanted to create a platform which I could share with like-minded people. It takes a lot of courage, humility, and trust from participants to be in the show, particularly from people who’ve never spoken up in public before, and with that comes respect.

If you’re not telling the truth in the theatre you have no business in being there, and bearing witness to true stories from people who simply want to be heard, is inspiring and an unbelievable privilege.  It’s cathartic and life affirming.  I would hope our audience experiences this.

How have audiences reacted so far?

Overall it’s been very positive and I always get people coming up to me after wanting to be in it next time.  Last year we were in Australia for the Arts and Culture Programme for the Commonwealth Games on the Gold Coast and one person wrote me after to say ‘I had a wonderful uplifting time and sparkled all the way home’. We were also in Zagreb and in Leeuwarden for European Capital of Culture.  In Zagreb they said it was a ‘beautiful’ project, and in Leeuwarden they said ‘thank you for carrying this stage around the world’.

Right now, we’re on a UK tour, but next year I’d like to tour US and Australia again.  My mum lives in Australia and took part on the Gold Coast last year.  She wants to do it again, so hopefully we can make it happen.

What would you say to anyone thinking of coming to see Truth to Power Café?

It’s only an hour, great value at £10 (or less in some venues), and it might just make you feel hopeful and put a spring in your step!!

Truth to Power Café directed by Jen Heyes, next performance 1st June Hull Minster with Back to Ours followed by a national tour.  To book tickets and/or sign up to take part visit https://www.truthtopower.co.uk/takingpart-dates