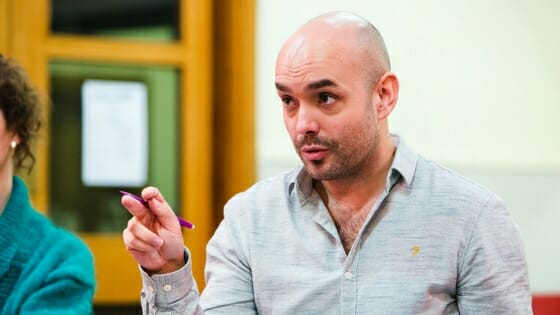 Dear Brutus from J. M. Barrie, the celebrated writer of Peter Pan, plays at the Southwark Playhouse in December.  This haunting drama of self-revelation is darkly comic, and presented in a sumptuous production for the play’s centenary year.

Miles Richardson will lead the cast of eleven in this rarely performed play.  We spoke to Director, Jonathan O’Boyle about Dear Brutus, the challenges of directing a 100 year-old play, and his most recent production, Hair The Musical.

You’re directing Dear Brutus at Southwark Playhouse, what can you tell us about it?

J.M. Barrie’s Dear Brutus is about a group of apparent strangers who are invited to a mysterious house in a remote part of southern England. Their enigmatic host tells stories of a fantastical wood that appears once a year on Midsummer’s Eve. The wood offers all who enter a ‘second chance’. The sceptical guests are transfixed when the wood appears right on their doorstep…

What attracted you to Dear Brutus?

It’s a brilliant play with such beautiful lyrical language. It interrogates the innate human sense of longing for a different life and loss. It’s also rarely performed so we had a complete blank canvas when we were approaching it. It deals with very pertinent themes of loss, love, the second chance and most importantly – what might have been if we’d all taken different paths in life.

Why do you think it is so rarely performed compared to other J.M. Barrie works?

I’m not sure, because it’s a real gem. I urge anyone who’s interested to go and have a read of the play and see what they think. My hunch is that the play’s form and stage directions can be very off-putting for actors and directors. I have never seen or read anything quite like it. A cross between a novel and a play. The opening stage direction describing the setting and the characters is almost five pages long, and then they continue. Barrie ‘directs’ the actors every line with a description of how the line is to be performed. It was quite difficult to read in the first instance and took a few goes to get down to the substance of the play. So I think that may be one factor that puts people off.

Do you think audiences will recognise this as a play by J.M. Barrie?

Absolutely! The themes and characters in Dear Brutus resonate so beautifully with a modern audience, and they also appear in other key works by Barrie, particularly Peter Pan. Dear Brutus is often described as ‘Neverland for grown ups’ and the audience will see direct parallels to Peter Pan. One of the characters is often described as potentially being an aged Peter Pan himself.

It’s set exactly 100 years ago, how will you help the cast transport themselves back a century?

We’ve spent a lot of time researching around the period and the author. Barrie was writing this play at the height of the First World War, yet there is absolutely no reference to the war in the play. This in itself is fascinating. Barrie wrote about escapism. A world where characters are free to explore and live out second chances. A lot of our work in the rehearsal room is finding that freedom and the humour that unlocks the wit in Barrie’s writing.

You’ve just directed the 50th anniversary production of Hair, what are the differences and similarities in directing these two productions.

They are VERY different. Hair is the original rock-opera featuring 40 songs, raging at the inequalities and abuses of power that threatened the world back in the sixties, and that still affect us today. Dear Brutus is an existential play about what our lives might have been if we’d taken a different path in life.

So I guess both pieces are about seeking a brighter future for yourself and others. One of the similarities I faced when approaching directing them was how to breathe new life into work that has such a chartered and long history. I wanted to approach both with a fresh eye for a new generation that would be experiencing the shows for the first time.

Dear Brutus is at The Southwark Playhouse 29th November – 30th December 2017, and tickets are available here.