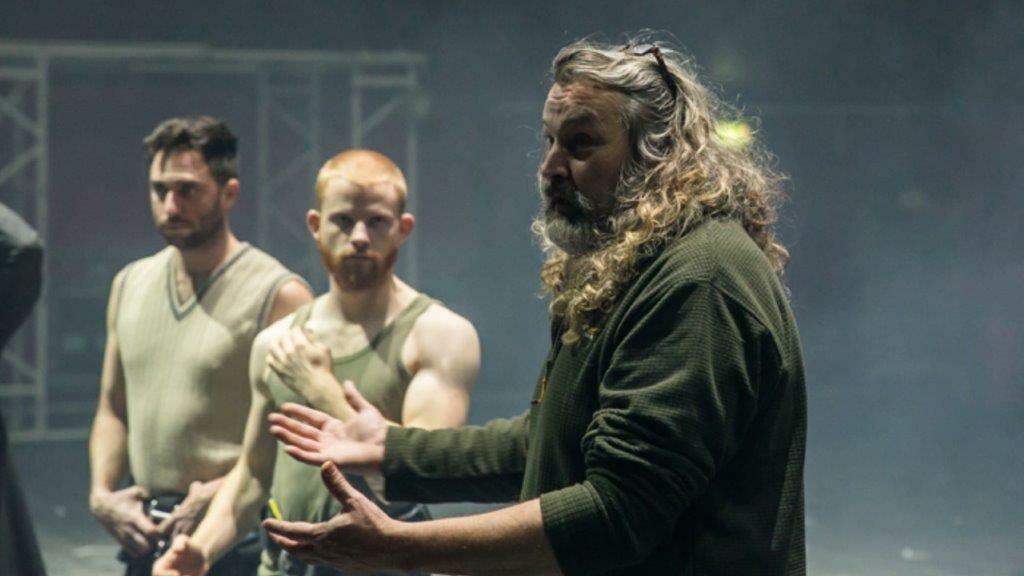 Tom Rack is the artistic director, and one of the founding members, of NoFit State circus which since it began in 1986 has become the UK’s leading large-scale contemporary circus company, producing professional touring productions and a variety of community, training, and education projects for people of all ages.  The company comes to London’s The Roundhouse this January with Lexicon which brings together world class circus performers and musicians in a daring, free-spirited and mischievous take on contemporary circus.

Tom himself was a juggler, and along with some university friends formed a juggling troupe that would perform at music festivals, “we were young and going to all these music festivals,” says Tom, “and we realised that we could get in for free if we put on shows and workshops, and that if we did that we could use the university mini bus for free too!”

Tom reflects that the eighties were a very politically charged time, and the group also found themselves performing at demonstrations and rally’s up and down the country, “I think it was performing at things like the Minors Strikes which really gave us the impetus to begin.”

When university came to an end, there was a temptation for the troupe to go their separate ways and get ‘real’ jobs, explains Tom, “but, we were in our early twenties having the time of our lives and we thought let’s just give it a go.  I do think circus is a way of life as much as it is an art form.  We were bitten by the freedom and the ability to travel and do our thing.”

The group did find themselves travelling, and their act took them right across Europe, even if they weren’t always made to feel welcome, “when we were in Spain there was a backlash about all the British tourists coming over to the Costa’s, we came back from performing one day and found our van had been set on fire, luckily we had all our stuff with us that day so we just picked ourselves up and carried on.”

By this point the company had moved in to Big Top shows, “We were using someone else’s Big Top, and he realised if he booked us he could run three shows with us, and we would take the top up and down, plus sell the popcorn! He was on to a winner, and we thought we could do this ourselves, so we did everything but beg, borrow and steal to get our own first Big Top, and the rest of history.”

NoFit State became famous for shows like ImMortal, tabu, and Bianco, but their first was a show called Take a Chance, “it was based on the Monopoly game, and was a politically edged show based on challenging capitalism, we’ve always tried to be innovative, in the build up to the Millennium we had been working with the Welsh National Opera, bringing circus to opera, it was bringing in young people.  We put on some large-scale shows, in the promenade format that we became best known for, and that meant we could get a second bigger Big Top.”

Tom says that it always surprises him when audiences say a NoFit State show is like nothing they’ve seen before, “for us it’s just what we do, pushing the boundaries and trying something different, but with Lexicon we wanted to try and challenge our own format, and go back to the heritage and tradition of circus.”

Lexicon was created for the 250th anniversary of circus in 2018, and is meant to be a real celebration of circus, “we have a young company with some of the older circus skills that are perhaps not as well represented in contemporary circus,” explains Tom.

“It is possibly the most family friendly show we have ever done, but our traditional audience will still enjoy it – it’s really accessible.  So many circus skills have been crammed in to the two hours, yes there’s a theatrical construct, it’s a theatrical show, but it’s not a piece of theatre.  But like most contemporary circus there are individual stories and a subtext that people can engage with, or just sit back and enjoy the thrills, spills, danger, and adrenaline.  Circus is unique like that, there’s something for everybody, that’s what makes circus one of the most democratic art forms.”

Tom explains that the artists are at the heart of Lexicon, “We wanted to do things differently, so we spent a lot of time finding really talented young artists and with the artists we create the show – there isn’t a script that we expect them to follow, it’s created with their skills and vulnerabilities, and that means the final product has more depth and poetry and connects better with the audience.”

Tom is excited to be bringing Lexicon to The Roundhouse, “we’ve performed at The Roundhouse before and regard it as our spiritual home in London.  It is very similar in shape and size to our Big Top, so it feels a bit like we are at home.  It’s a beautiful building, it’s been renovated with circus in mind and we actually build our tent without the skin right inside The Roundhouse.  It works really well and looks fantastic.”

I ask Tom what he would say to anyone who has never considered visiting the circus before, “There’s a real resurgence now in circus and the standard and quality has increased exponentially.  This show is joyful and funny and it is good fun.  People come along to transport themselves somewhere else for a couple of hours, there are some fantastic circus skills to see.  Anyone who hasn’t seen circus before, should come and watch, I’m sure any preconceptions they had of circus will be shattered.”