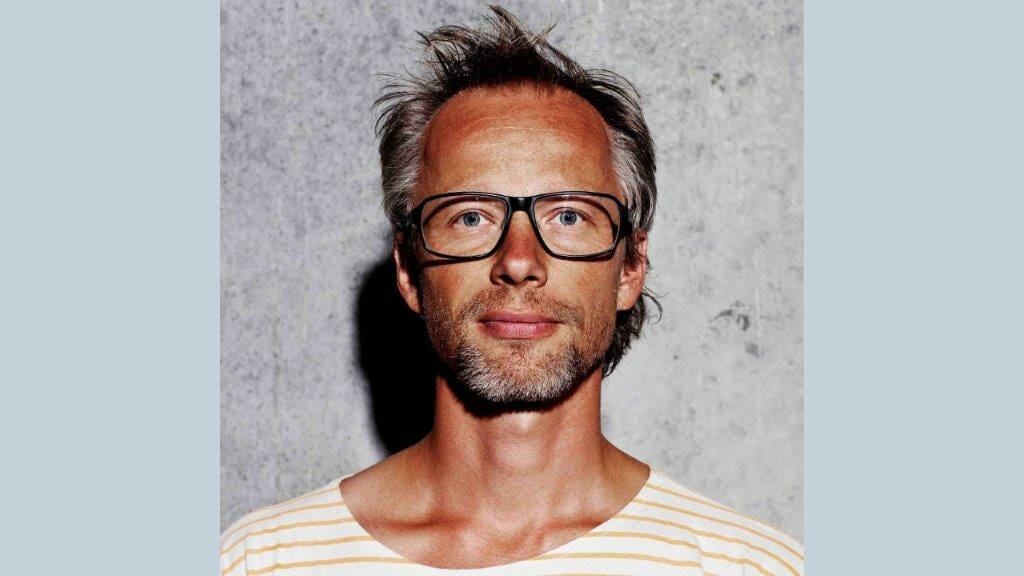 Fix&Foxy is lead by Tue Biering and Jeppe Kristensen, award-winning Danish artists who innovate with pop culture, blockbusters, media and kitsch to make playful and poetic theatre that deals with modern societal taboos.

Tue Biering is also the writer and originating director of Land Without Dreams, part of the upcoming celebration of European Theatre which comprises a mini-showcase of Danish work at the Gate Theatre.

Land Without Dreams is at The Gate Theatre 14th November to 7th December 2019.

You are bringing Land Without Dreams to the Gate Theatre, what can you tell us about it?

Well, it started as a kind of fantasy, a mind game about time travelling.   One day I was just thinking “what if a person from the future really appeared on stage and said “Hi I come from the future”. Would I ever believe it was true?  And so, an idea was born.  And it also came from a need to work in what could be perceived as an ideal environment, a Utopian space, just simply alternatives to the present status quo.   And to do that you need the power of imagination, a vision.  So it also became a performance about our ability and our inherent need sometimes to imagine things that are not yet there.  To imagine a better place.

What inspired the play?

It is very much a play for our times.  I have felt helplessly hopeless – as a lot of other people do these days- regarding the present global political polarisation, with major issues like climate change, poverty, corruption, rising inequality etc, and I found myself in an instant need of some kind of hope, as fuel and a spur to get myself moving and motivated into action.  I needed to hear a voice comforting me, saying “it will be alright” and the voice would come from a person from the future. To change things we need hope, not panic. Land Without Dreams is very much a play about hope.

We are a Danish company doing a variety of very different types of site-specific work and performance inside and outside conventional theatre spaces.   We are known for reimagining and playing with established titles from popular culture.  We made a stage version of the blockbuster movie Pretty Woman which explored the power dynamics of buying and selling of yourself for money.  Each night we paid a sex worker to perform the role of Julia Roberts’ character Vivian in three construction site containers situated in the red light district of Vesterbro in Denmark.   The show paid for nine women, who were given stage directions and lines through an earpiece, and the performance sparked real debate on the subject of sex work in the local community.

Another show was a radical version of the popular tv sitcom Friends in which we cast a group of asylum seekers as the six friends hanging out in Monica’s flat instead of the asylum camps around Copenhagen.  The production was performed as a series of 13 episodes, at once both a live theatre performance and sitcom recording in front of a live studio audience.

We have created a version of Twin Peaks, where the audience was transported around in cars by local citizens in a remote province of Denmark. The show’s cast included a legal psychiatrist, a high school teacher and the former police investigator.  They would then drive audience members through the winter darkness to meet other locals and hear their personal stories. The production was a portrait of Odsherred and investigated our ideas and prejudices about strangers.

In another performance we outsourced a very well-known Danish classic play to Bangladesh and had a group of Bangladeshi people learning the lines in Danish and afterwards had them performing an exact copy of the original at the Royal Danish Theatre for 1/10 of the price it would have costed to produce in Denmark.  The financial surplus was distributed to the audience by giving them free drinks, buying them pizzas during the show or just giving some of them a lot of cash.

Often, we want to use the tools of theatre to investigate reality. And often we use some of our present pop cultural icons we all know, as stepping stones to flip around some accepted stereotyped images to question and interrogate things.

What are you looking forward to most about bringing this show to a London audience?

I am looking forward to going on this mind-trip with the audience in London and find out how connected we really are. I really like the idea of sharing and collaborating and it is interesting to see how a performance grows and transforms and gets a new body.

What are you looking forward to most about this partnership with the Gate Theatre?

I hope this Is only the beginning of a long relationship because at Gate Theatre under Ellen MacDougall, I have found some people I really feel artistically related to and want an ongoing, deep conversation with.

What would you say to anyone thinking of coming to see Land without Dreams?

I think I would say as little as possible. No matter what I say, it will not describe what they will experience, they will be surprised I am sure.

First Look: A Land Without Dreams at Gate Theatre

Cast Announced for The Ridiculous Darkness at The Gate Theatre

Silent Uproar Releasing £20,000 to Support Writers in the North of...