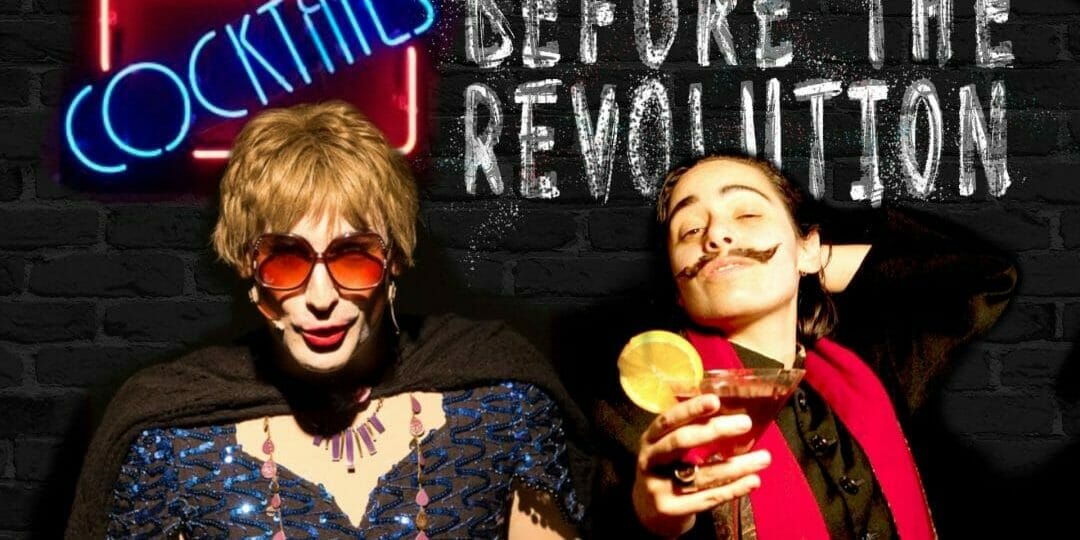 Razed and Confused Cocktails Before The Revolution

Following their first foray into digital in June, Raze Collective are back with a festive party complete with cocktail making and breakout rooms so audiences can hang out and have a drink together. Frankie Thompson, a visual artist and emerging idiot, will be dropping in with an aerial surprise, and two emerging queer acts will be presenting fabulous short performances: Cocktails Before the Revolution from Joé de Vivre & Tilda Death, and Thatcher-Rite: Tea-Time from Jack Boal.

In Cocktails Before the Revolution, irrepressible non-state actors Joé de Vivre & Tilda Death invite you for a special evening of drag and drinks, mocktails and Molotov Cocktails. A casual tutorial that will teach you the essentials in mixology and co-resistance from a social distance. This festive season Tilda’s got some recipes every guerrilla needs, and there’s no assimilating Joé when he’s sugar high on glacé cherries. So happy Hanukkah bitches…

And for something less alcoholic but no less incendiary, Jack Boal will be bringing Thatcher-Rite: Tea-Time. Part interactive performance, part drag talking heads, the audience come for Tea with our dearly departed Maggie live and Dragged back from the afterlife. Come for a natter, a chit-chat, an exchange of ideas, if you will. Oh and bring cake! Don’t. Forget. The. Cake.

Audiences are invited to join in the cocktail making using lemons, ice and their favourite spirit, and a variety of breakout rooms will be open for 30 minutes at the interval and 30 minutes after the performances so audiences can have a natter at the (virtual) bars, where the DJs are playing live. Perfect for a virtual office party, there may even be some Christmas songs…

The charity and arts collective, Raze Collective, has commissioned these early career artists working in theatre, cabaret and live performance to support those who rely on venues and live audiences. The charity is called Raze as the organisation was established in response to queer spaces being razed, through the threats and closures of many queer performance spaces in London and elsewhere around the UK, such as Camden’s much-loved The Black Cap.

The event will be streamed on Something To Aim For’s new digital platform, Us In The Making, a site for experimentation and co-creation, which aims to support artists who have been de-platformed through the Coronavirus lockdown. A collaborative project mobilised to help organisations sustain their communities whilst building new connections and profiling critical voices online.

Raze Collective producer Cassie Leon said, “Our first event went so well and we were able to support some great artists so we are doing it again! Creatives are not able to rush back to work and put on shows in theatres so we are encouraging them to create, experiment and explore making digital work from home. With brilliant technical support and creative ideas the artists are cooking up something exciting. It is important to us to be able to support queer performers during this tough time and what better way than to be able to keep creative and develop a few new skills. We also recognise that for many people the act of leaving their homes isn’t possible so we are coming to them! Digitally.”

Razed and Confuzed is a series to give LGBTQAI+ early career artists the opportunity to develop performance in the early stages of creation. They offer performance opportunities, rehearsal space, production support, producing and directorial support and a cash fund to make sure they are able to support queer artists. This is in response to performers’ feedback that there is limited opportunity for scratch performances of newly developed work outside of low-tech bars and clubs.

Razed and Confuzed is on Friday 11th December, tickets are on sale here https://www.outsavvy.com/event/5497/razed-and-confuzed-goes-digital-2