Review: 12 at The Greenhouse Theatre

A winding, complex narrative follows two lovers before and after their world implodes in this charming production at The Greenhouse Theatre, a pop-up venue in Canary Wharf’s Jubilee Park.

Exploring the concept of memory, language and intimacy in the face of a changing world, characters a and b experience the expected and unexpected in life, and ask what are the things worth saving in the midst of an emergency.

The actors Leyon Stolz-Hunter and Ayesha Milner-Glover are more than a match for each other. From the moment the two lock eyes, you can feel the crackling chemistry between them – there’s never a doubt that this is a couple destined to be together. Stolz-Hunter, playing a, brings a cheeky charm to the role, his impressive stature contrasting with his gentle performance. He exudes the character’s love, ambition, insecurity and fear in a capable and affecting performance.

His sweet nature is complemented by Milner-Glover’s performance as b. She has a wonderful confidence, a natural ability to add a wink and a smile to every line, alongside a strong sense of comic timing and, in the later parts of the play, a sadness behind her eyes.

While both excel at portraying the joy in their love, they stumble somewhat in the more emotional scenes, struggling to connect fully with the dark emotions. Perhaps this is due to the rapid leaps between moments in their lives, but in any case, as a study of a couple in the highs and lows of their existence, it’s a large success.

Review: Hjem at The Greenhouse Theatre

The Greenhouse Theatre to Launch Pop-Up at Canary Wharf

12 swings wide with its writing, and lands a number of hits along the way. The opening, where our two characters meet for the first time, is sweet, relatable and wonderfully awkward, with witty dialogue from Henry Roberts bringing out the best in the characters.

As we venture further into the play, however, there’s a sense of vagueness that pervades the text. There’s a mystery that takes far too long to resolve, and isn’t clarified until almost the very end of the play – it’s a good idea, but as we spend extended periods of time watching these characters grow (with flashes of this mysterious and disastrous future appearing briefly and regularly) the play takes far too much time and liberty with its plot. With some editing, 12 would be far more engaging – cut the repetitive elements and clear up the journey, and we’ll be much more invested in the narrative.

Lata Nobes and Maria Petitti, director and assistant director respectively, do a wonderful job with the space they’ve got, creating a sense of privacy for the characters, like we’re peeking into their whole world in microcosm. Using the space effectively, with heaps of physical elements and a brisk, energetic pace, they rarely let the play stray into self-indulgence, keeping the dense material buoyed and allowing their actors the freedom to connect and play.

They’re helped in no small part by the beautiful Greenhouse Theatre, a wonderful in-the-round pop-up space made with entirely recycled materials. A beautiful addition to London’s theatre landscape, and hopefully an example to new venues in the future.

12 isn’t a perfect play, but it has a powerful message, a beautiful venue and some wonderful committed performances.

12 runs alongside Hjem and As You Like It at The Greenhouse Theatre, a pop-up venue in Jubilee Park.  Full listings and ticket information can be found here. 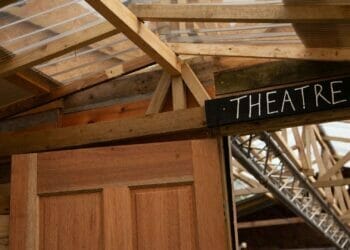 Review: Hjem at The Greenhouse Theatre 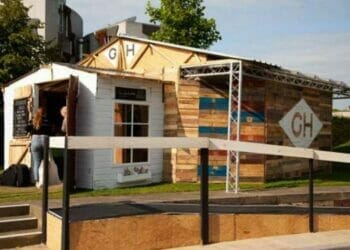 The Greenhouse Theatre to Launch Pop-Up at Canary Wharf 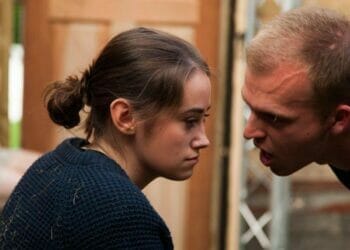