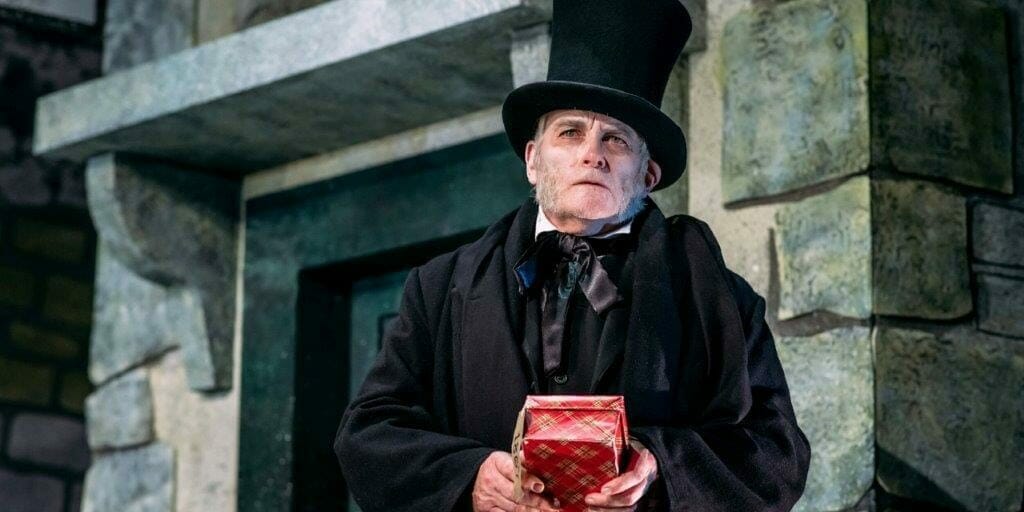 Review: An Edinburgh Christmas Carol at The Royal Lyceum Theatre

You know the story, Ebenezer Scrooge is a nasty old man with no kindness or Christmas spirit, until he is visited by three festive ghosts and transformed forever. In Tony Cownie’s 2019 adaptation, An Edinburgh Christmas Carol, the same ensues while being watered down by the addition of references to Edinburgh architecture and its old town as well as a partly fictionalised retelling of the story of Greyfriar’s Bobby as it happens. This production, which boasts a prestigious and well-respected Scottish cast, runs from the 28th of  November to the 4th of January at The Royal Lyceum Theatre in Edinburgh.

Regardless of the extreme amounts of retellings and reimaginations of this Dickens’ classic, it never seems to lose its charm and timelessness. It’s well-balanced mix of playful festivity as well as haunting political and social commentary always plays a key role in every reprise. However, Tony Cownie’s script pushes all of the most unique and effective elements of the story and replaces it with attempts of honouring the city in which it’s based, which would probably be more of interest to the people attracted to the stereotypes and unscratched surface of Scottish culture, rather than those who experience it first hand. The incorporation of Greyfriar’s Bobby is the only thing distinctly Edinburgh about this production, and while this plot is charming and whimsical, it feels unnecessary and unreasonable to suggest that the original piece wasn’t enough without it. Cownie’s script cuts corners and takes shortcuts whenever it can, leaving no room for any visible character progression, even for the protagonist. The piece messily rushes through every adventure Scrooge has with the spirits and leaves no satisfying resolution for any of them.

An Edinburgh Christmas Carol boasts an impressive cast of some of the most respected names in Scottish theatre currently. Each performer holds the audience’s attention throughout and milks as much substance that possibly can be from Cownie’s script. Grant O’Rouke and Nicola Roy particularly shine as they effortlessly entertain with a diverse range of characters, adding colour to the dialogue. Crawford Logan does the best that he can as this version of Ebenezer Scrooge, but is restricted by both the writing and direction and isn’t allowed to display the vulnerability or childlike playfulness that this character should be allowed to display.

The crown jewel of this production is without a doubt the incredible puppets of Greyfriar’s Bobby and Tiny Tim, made by Simon Auton, directed and operated by Edie Edmundson. It is beyond refreshing to see puppetry so simple yet so engaging and playful. Edmundson shows incredible attention to detail in the dog’s movements and an effortless grace in executing them. Also, very simply, the dog is absolutely adorable.

An Edinburgh Christmas Carol is a charming attempt at transporting the heart of the original to the capital. However, with direction which usurps what solidified the original as a cutting and moving classic and a script that lets its brilliant cast down, it would appear that a lot of the magic was lost in transit.

An Edinburgh Christmas Carol is at The Royal Lyceum Theatre Edinburgh until 4th January 2020.