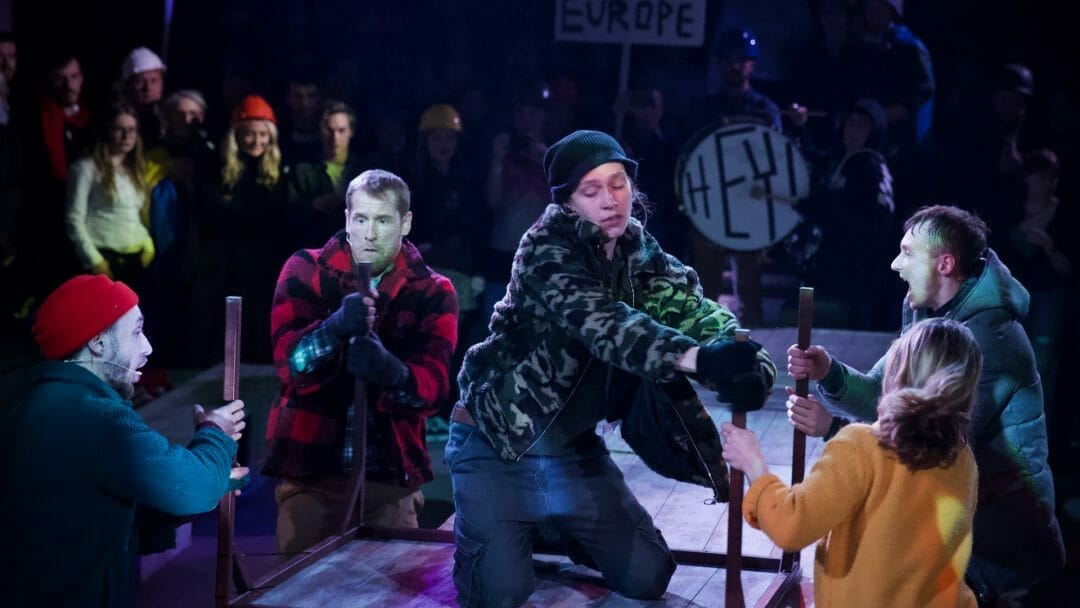 The annexation of Crimea was both widely reported, and condemned across the globe, but as so often happens in history, the preceding events have slipped out of the public consciousness, on this side of Europe at least. Critically acclaimed at the Edinburgh Fringe, and in a new version directed by co-writers, Natalia Kaliada and Nicolai Khalezin for Belarus Free Theatre, Counting Sheep headlines VAULT Festival in an eight week run, and takes its audience deep into the Ukrainian Revolution, and the events of 2014 which saw the Ukrainian government overthrown following five days of civil unrest.

This is a deeply personal story, told by people who were there. The revolution is intertwined with a love story, that of Mark and Marichka Marczyk who met, and fell in love on the barricade. It’s described as a Ukrainian folk opera, but that probably doesn’t do the production justice. Yes, there’s traditional music, played live which creates a superb atmosphere but there’s so much more to this attention grabbing piece of theatre.

Counting Sheep is immersive theatre at its finest. There are three ticket types; Protestor Premium, Protestor, and Observer. The first two will put you right in the center of the action, and very much part of the show, the latter will have you sitting in traditional theatre seating, watching the revolution unfold.  Now, I’m usually the type of person who enjoys immersive theatre best when I’m watching other people doing the immersing. Sitting on my protestors bench waiting for the show to start, I gazed longingly at the observers, wishing I had opted for one of those tickets. By the end, I had changed my mind completely.

It all begins fairly pleasantly, those of us at the long table and outside benches shared some food with our neighbours while we were given some background information about Ukraine and Mark and Marichka Marczyk. Projections down the length of each wall mixed live action with news reports and found footage, adding to the immersive experience. Soon I was dancing with a complete stranger, who I wouldn’t see again until we both found ourselves huddled behind a riot shield protecting ourselves, and our new group of compatriots, as Kiev burned around us.

I was a guest at a wedding, played games and helped move tyres and sandbags (so many sandbags) to help build the barricade. I felt the sense of urgency and terror, I lost my bearings and followed instructions blindly, I saw horror and humanity come together as adrenaline pumped through my body. At the end, against my better judgement, and in spite of a dodgy knee, collapsed, exhausted on to a damp sandbag, and wrapped a blanket around myself as we mourned the dead.

You are very much part of the production, and the way the creators have shaped the experience is undeniably effective. Make no mistake, this is full on experiential theatre, and you’ll find yourself worn out and emotionally drained by the time you’re through.

As a protestor, I was of course dragged in to, and caught up in the action. I’m not sure just how effective the show would be to an observer. Did they enjoy watching us build a barricade? But, stripping out the immersive element, and you’re still left with a very compelling love story, set against a traumatic public struggle which everyone should find engaging.

The climax of Counting Sheep is deeply moving, there is a real sense among the cast and audience that we have shared something unique together, we have bonded. The fact that it is based on reality, and recreated by those who were there, only serves to make the whole experience even more emotional. How ever you feel about immersive theatre, be brave and join the revolution, you could just find it a life changing experience. 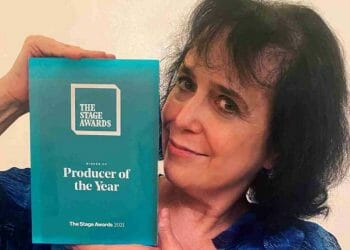 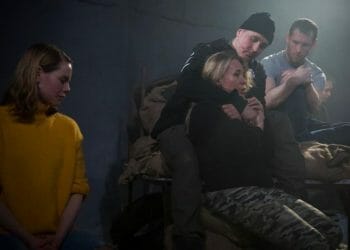 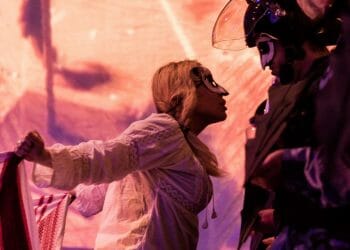