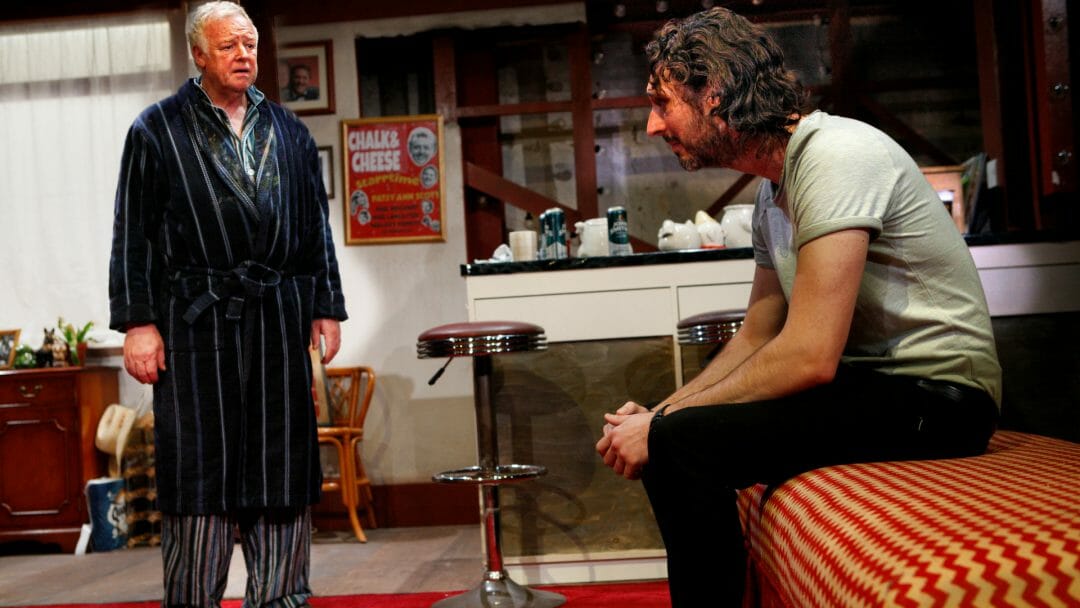 End Of The Pier Review

Review: End of The Pier at Park Theatre

Those comedians from the seventies, the ones who regularly commanded 20 million viewers on prime-time TV, are still (mostly) thought of in fond terms, but many of their jokes wouldn’t be tolerated today. Danny Robins uses this as the springboard for new comedy End Of The Pier, a biting social commentary on changing social attitudes and racism.

Exiled and alone in Blackpool, Bobby is one half of former comedy duo ‘Chalk and Cheese’, after thirty years of making the country laugh, he and his late partner were disgraced when a journalist filmed them telling a racist joke.  Now it’s his son Michael who has hit the big time, and although he may not pull in as many viewers, he does have 1.4 million followers on Twitter.  As he and his fiancé, Jenna arrive in town to film the latest series of his show, a stranger named Mohammed makes it clear that Michael isn’t as ‘nice’ as he appears on TV.

Danny Robins teases the story out nicely, it is fairly obvious which path we are being led down but it is still enthralling to see the plot unfold with the odd twist.  There are points where the dialogue is a little over-egged to accommodate key plot points, but as an audience we probably understand well enough why that needs to be the case.

Les Dennis, who is now truly making a name for himself as an actor, is exceptional in the role of Bobby.  His dialogue is peppered with old jokes which at first make the audience groan, and then giggle, as we remembered a time when comedy was simpler.   Blake Harrison gives a strong performance as Michael, summoning up bile and hatred as easily as the one-liners, which works well in contrast to Nitin Ganatra’s more manipulative Mohammed. Tala Gouveia’s Jenna feels like the least authentic character, neither snobbish enough nor reacting suitably to the story’s climax.

A play about stand-up comedians needs to have some stand-up, and we get a routine both from Blake Harrison and Nitin Ganatra, who each do a fine job of interacting with the audience and making it feel as close to the real thing as possible.  Even still it’s clear these are routines written by a playwright and delivered by actors, Ganatra’s routine is uncomfortable, but it’s supposed to be; the audience laughing tentatively and only when it feels appropriate to do so.

End Of The Pier does a marvellous job of exposing bigotry, and director Hannah Price makes sure that the relevant material is top of the bill.  It’s genuinely funny in places, mainly thanks to Les Dennis and his straight-faced delivery, but also really makes you think about the misery often inflicted for the sake of getting a laugh.

Tala Gouveia in End of the Pier at Park Theatre. Photo by Simon Annand

Tala Gouveia & Blake Harrison in End of the Pier at Park Theatre. Photo by Simon Annand

Nitin Ganatra in End of the Pier at Park Theatre. Photo by Simon Annand

Les Dennis in End of the Pier at Park Theatre. Photo by Simon Annand

Les Dennis in End of the Pier at Park Theatre. Photo by Hannah Price

Blake Harrison in End of the Pier at Park Theatre. Photo by Simon Annand