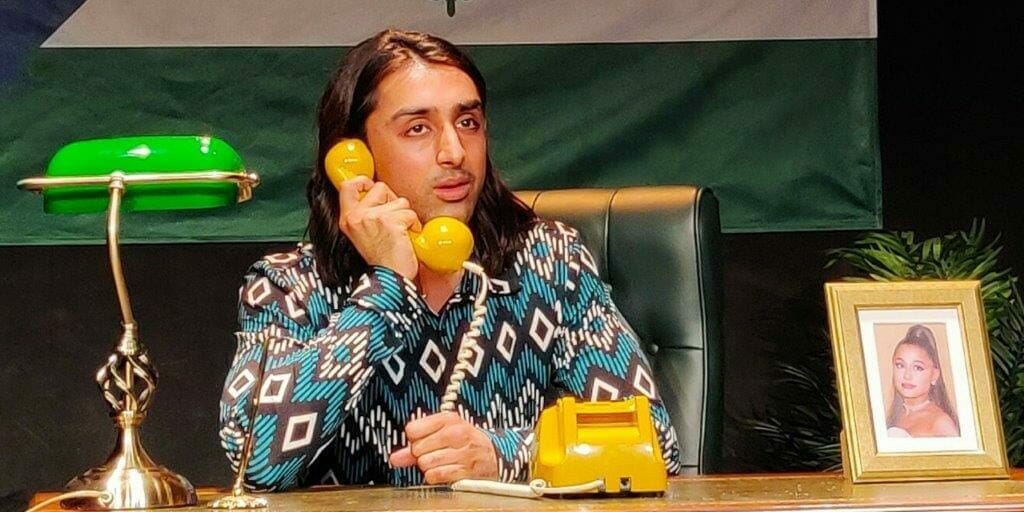 We’re probably all just a little curious about what exactly world leaders say to each other when they’re having a phone conversation.  Indeed, the US Congress and Senate have been very interested in those conversations over the last couple of weeks, and as the impeachment trial concludes the way we all knew it would, Rob Thorman’s Head of State makes a timely debut at VAULT Festival.

In Nechora, a country “no bigger than most capital cities,” newly elected Mo finds himself receiving congratulatory calls from the heads of much bigger states.  Instead of the one-minute pleasantries prescribed by his Chief of Staff, Mo finds himself providing a form of therapy to his new found peers.

When his Grandmamma’s platitudes are no longer enough to console the world’s leaders, Mo attempts to solve their biggest problems himself, despite the CEO of a tech giant doing all he can to keep nationalism at an all time high.  Mo’s only hope is that he can convince the leaders to attend his summit on climate change, and if he can get Ariane Grande to perform in Nechora, that would be a bonus too.

Akshay Shah plays the enthusiastic Mo, a fresh pair of eyes that can boil problems down to their grass roots.  Shah has fun with the role, and the spontaneous dancing certainly livens things up.  As a character, it’s quite difficult to really accept Mo, even as a parody it’s a tough sell.  One minute he sounds like a Facebook meme, the next he could be quoting a politics text book, a more believable character would have sat somewhere in the middle of the two.

Lawrence Russell has the unenviable task of playing every other character, from the Chief of Staff to the British Prime Minister, and a slew of World leaders in between.  He does a fantastic job switching between the accents, and making each one feel as distinct as possible from the next.  None of these Heads of State are meant to be their real life counterparts, but they are written in such a way that certain personality traits are unmistakable.

Head of State captures current affairs particularly well; climate change, gun laws and the Salisbury poisoning all feature, but without forcing any particular viewpoint.  As Mo sits behind his desk the red phones behind him are utilised by Russell to make the calls, and for the audience it’s very easy to follow what’s happening.

Head of State is an amusing parody that perhaps relies too heavily on too few themes, and there’s only so much Ariana Grande we can take in sixty minutes.  Mo’s eagerness for change represents what the entire world probably hopes for, while the territorialism of the other leaders is easily recognisable.  Given the start he’s made we can safely assume Mo will escape any impeachment proceedings, but whether he could change the world is very much up for debate.