Primrose Path is the first recorded theatrical production from raw and visceral theatre company, Mannequin Mouth. The piece is a 90-minute psychological horror-drama exploring intimacy, fetish, violence and the relationship between all three.

Primrose Path is horrifying in multiple ways. The sheer ballsiness of everything that is discussed and displayed in the hour and a half duration is reminiscent of Sarah Kane’s work, with multiple layers of discomfort added through opportunities that could only be seized through producing the piece as online theatre.

The co-direction from India Howland and Will Pinhey is intense and uncomfortable and never lets up, which is both a blessing and a curse. Pinhey’s script sets off with the speed and momentum of a bullet train, with aggressive and life-threatening conflict commencing from the first line and only spiraling more and more out of control until the final moments. The refusal to relieve the audience of this unbearable discomfort for no more than two minutes definitely immerses the viewer in the twisted world that the characters live in, but also fatigues them and makes it harder to stay focused on the action as it grows more and more absurd.

Howland’s direction of photography and visuals, as well as the original score provided by Hanna Gardner in the third act of Primrose Path may be the highlights of the entire piece. The innovation and palpable atmosphere that both of these factors bring to the film make it one of the most original and effective pieces of recorded theatre that I’ve seen, not only during the current surge due to the covid-19 pandemic, but ever. Howland and Gardner’s work during the third act makes the final half hour of the piece play like a climax in a Darren Aronofsky film.

Michael Hogg shows a significant amount of stamina and tenacity in his performance as Damon. Unfortunately, the lack of range in the character of Damon’s levels of intensity make it easier to disconnect from the character and hard to feel the vulnerability that they are trying to communicate during the impending wreckage of everything around them. The same could be said about Samuel Nicholl’s performance as a random man that gets roped into Damon and Chris’ violent sexual fantasy. However, the character seems to be nothing more than a pawn to be manipulated by the couple for their own entertainment, which Nicholl’s portrays convincingly.

Laura Jackson is a powerhouse as Chris. The roller coaster of intensity and emotion that Jackson portrays so effortlessly allows the character to dive into Chris’ complexities and traumas that have resulted in her having such a vivid and visceral fascination with violence in a sexual context. While the effectiveness and horror of the piece is definitely a team effort from all involved, Jackson’s performance truly makes it.

In summary, Primrose Path is disturbing, traumatising, provocative and utterly absurd. It’s a true testament to how recorded theatre could very well be the future for new writing and why that’s definitely not a bad thing, when you have such talented and hard-working artists involved.

Primrose Path is available for viewing on Mannequin Mouth’s website and Vimeo page. 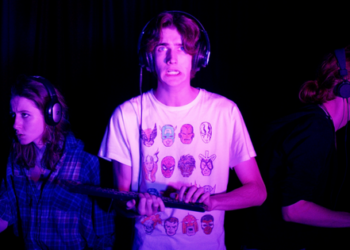