Review: Privates on Parade at The Union Theatre

Review Privates on Parade at The Union Theatre

As we advance full throttle in to pantomime season, the Union Theatre has its own version of a grand old dame treading the boards. Not a leftover from last year’s Soho Cinders, but Captain Terri Dennis in Peter Nichol’s hilarious Privates on Parade, which returns for a fitting revival.

Private Flowers arrives at the overseas barracks of The Song and Dance Unit South East Asia (SADUSEA) right in the middle of rehearsals for The Jungle Jamboree, which is to play to the troops in Singapore before heading north.  Amidst the patent leather shoes and powder puffs, the inexperienced Private unwittingly uncovers corruption, and black-market trading.

Often, the Jungle Jamboree skits are so (deliberately) bad, they are fantastically funny.  On more than one occasion the audience groaned before descending in to schoolboy titters which lasted much longer than they should have.

There isn’t technically a war on, the troops are on the ground during the 1948 Malayan ‘emergency’, Privates on Parade, at a much deeper level is asking the same question many historians have asked, were the British troops there to keep the MCP in check, or to protect the commercially lucrative rubber trade.

The lack of warfare comes much to the disappointment of the overzealous Major Flack, who is completely oblivious to the habits of the men under his command. Putting it all down to not understanding showbusiness, he comments the last show he saw was in 1935, and that was puerile drivel.  The same could be said of Privates on Parade, unless you take the time to look beyond the camp cabaret, and see the deeper meaning of what is unfolding.

Whether you do choose to look for the deeper meaning or just enjoy the many comical moments, you’ll find a wonderfully flamboyant show, directed by Kirk Jameson.  On the whole it’s outrageously, and wickedly funny; a double entendre is shoehorned in at every opportunity, and if innuendo isn’t subtle enough, then the direct route is unabashedly taken, “don’t judge a sausage by its foreskin”.

Written in the seventies, the provocative language is shocking in today’s context, but in reality, is probably mild in comparison to the actual language used by soldiers overseas in the 1940’s. It’s clear this play with music doesn’t seek to hide any truths, merely dress them up a little.

Often seen as a star vehicle, this production seems to cast off that aspersion with a strong ensemble. As Terri Dennis, Simon Green is wonderful, blisteringly hilarious, and with perfect comic timing; his parody performances of Marlena Dietrich and Vera Lynn are divine, as is his take on Noel Coward.

But there are also some startlingly good performances elsewhere in the production, Tom Bowen is striking as Cartwright, despite being one of the less fully formed characters, when it comes to the song and dance numbers, Bowen is top of the bill.  Matt Hayden as Young-Love is a joy to watch, with perfect received pronunciation. Martha Pother, the only female in the cast, does a good job of giving her character distinction.

Samuel Curry, as Flowers, is stronger in the more dramatic moments, happily leaving the comedic elements to the rest of the cast.  Paul Sloss is wonderfully gormless as Bonney, and his character’s relationship with Bishop is another reminder of the deeper message to be taken from this play.

This is a scandalously funny play, that cannot fail to have you roaring with laughter, sometimes shocking, there are moments of pure gold.  So, forget the pantomime this year ducky and see Privates on Parade instead.

1. The Cast of Privates on Parade c. Toby Lee

The Cast of Privates on Parade c. Toby Lee

4. Review Privates on Parade at The Union Theatre

Review Privates on Parade at The Union Theatre 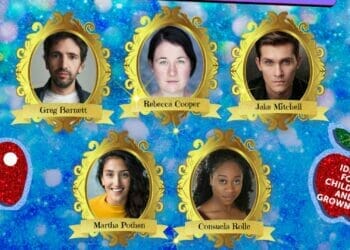 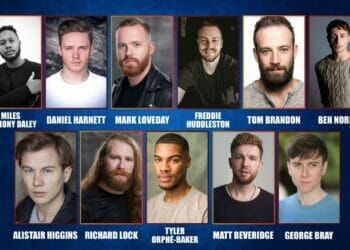 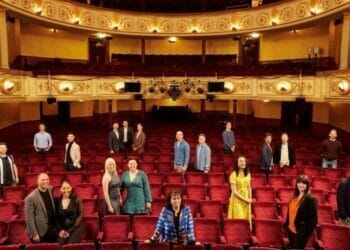