Theatre gives voice to the stories that we would never otherwise hear about. The 4th Country performed in the Crypt venue as part of Vault Festival did just that. Set in Northern Ireland and speaking of very recent events, the play features 4 actors telling a story that at times they find difficult to tell, because it is the story of real people who suffer and struggle. Nevertheless, they persist and succeed in telling it because they believe it does need to be told. Towards the end, the story is finished by the only people who have a right to, in that the Northern Irish actors represent the people of their homeland, whose story it is.

Many devices are used in this piece of documentary theatre directed by Gabriella Bird, such as actors passing props to each other, direct audience address, and discussion by the cast of what should happen next. Transitions in and out of character are shown by simple costume changes, such as putting on a cardigan. Crates are stacked in various combinations to create settings, and minimal props are used. All of these direction and design choices serve to remind the audience they are watching a play, and therefore are being challenged to think.

The sensitive content is cleverly handled by the focused cast, who each give fully to their characters, and the message of the piece. Rachael Rooney’s portrayal of Niamh is particularly effective through her use of non-verbal communication to create both moments of humour, and to show her deep pain and emotional turmoil. Kate Reid, Cormac Elliott, and Aoife Kennan  also give excellent performances.

The script of The 4th Country by Kate Reid is full of twists and turns that keep the audience engaged. The relationships between the actors when being themselves create a tension as they argue and fight for how they want the story to be told, due to their personal feelings about it. The actors’ vulnerability give gravity and importance to the story and the way the audience receive it.

The lighting designed by Catja Hamilton, uses colours of blue and purple to create an atmosphere of coldness, mirroring the sadness and hopelessness of the stories told. Lighting is also used to highlight transitions between scenes, with the use of silhouette that focused audience attention on the changing of the actors into their roles. Towards the end, a moment of blackout marked the climax message of the play in a poignant way.

The 4th Country is a success because of the balance within the script of humorous moments and audience-challenging serious content. There are relatable elements of everyday human and social moments that give the audience a way in to the characters complex lives, and make the audience feel at ease, which then gave the shocking serious revelations more impact. 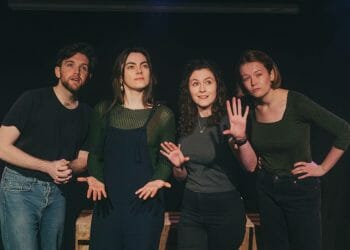