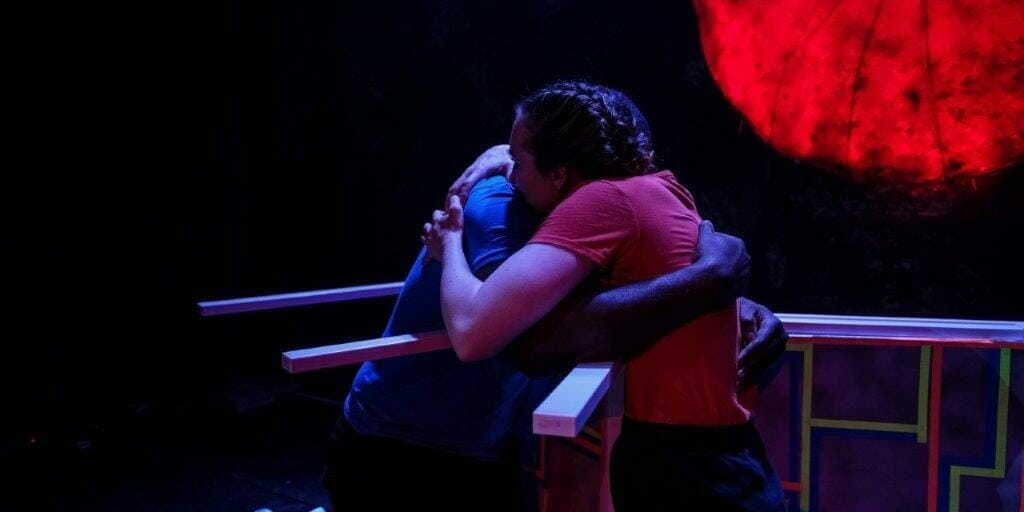 If the moon landing was ‘one giant leap’ then the first mission to Mars will be colossal in comparison.  It’s unlikely we’ll see such an expedition in our lifetimes but Barry McStay’s The First, premiering, at VAULT festival, imagines this future milestone in the history of humankind.

Just two astronauts hurtle towards the red planet, Rose (Katrina Allen) and Simeon (Daniel Ward) have had plenty of time on their epic journey to contemplate how they will be the ones to do everything on Mars first.  They just have to get there, and things are starting to go wrong.

Back on Earth, two writers (also played by Allen and Ward) have been hired to write the speech that will be delivered by the President at the end of the mission.  One will write the speech that declares it a success, the other, the epitaph for two great astronauts who didn’t make it the whole way.

McStay’s script subtly weaves together a number of themes; we know this is the future because the current Republican President is “worst than Trump”, yet everything feels familiar.  Rose and Simeon consider why they were chosen for the mission – did their race, gender or sexuality play a part?

As Armstrong 1 gets closer to its destination, we see the characters begin to confront their own mortality, and we are asked to question is it worth giving everything up – it’s clear this is a one-way trip – for eternal fame and glory.  On Earth, Alisha and Marcus battle their own demons, while following the progress of their newly created heroes, each of them knowing they will write one of the greatest speeches in history, but prey that it will never be delivered.

Director, Emily Jenkins, has created a sense of the claustrophobic nature of the shuttle.  Allen and Ward feel suitably restricted as Rose and Simeon, but with slightly more freedom to explore the space as Alisha and Marcus.  Of course, both sets of characters are confined, not just by their physical surroundings but by the weight history, and their own insecurities, is placing on them.

Mikey Brett’s movement uses physical theatre to help give the feeling of weightlessness in outer space, and it works exceptionally well.  Tingying Dong’s soundscape is laced with the incessant hum of the spacecraft that so annoys its passengers, all of which combines to create the pressure cooker like environment so essential for this production.

The First takes off like a rocket, and certainly stays on the right trajectory.  The way the two sets of characters are polar opposites of each other keeps the audience engaged, and makes it easy for us to distinguish between the characters that Allen and Ward so confidently portray.  The First could easily work as a longer piece, allowing more opportunity to explore the characters in more depth, meaning a future for this production is by no means out of reach. 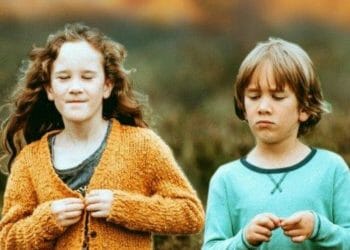 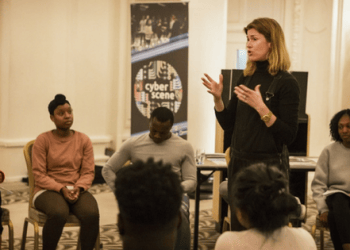