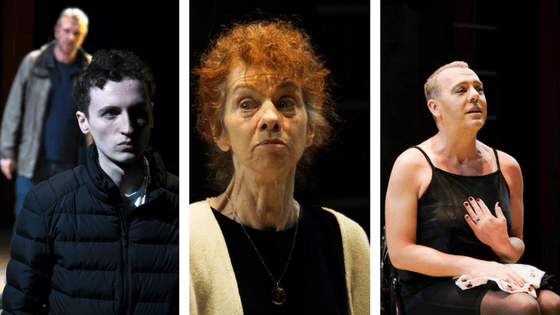 Full Disclosure Theatre last presented Xposed back in November 2017, and it was a triumph of a showcase.  Barely four months later, and the event returned to London with eight new short plays portraying an LGBTQ+ narrative.  This time though, Xposed was bigger, taking over the Southwark Playhouse’s Large, and selling out!

The expanded space meant slightly more staging than the previous event at The Hen and Chickens Theatre, although that’s not the important part.  Giving writers and performers a chance to present their work to an audience, and gain feedback, is absolutely invaluable.

It was nice to see lighting used effectively in this larger space, particularly in Tapestry by Fergus Church, and directed by Yojiro Ichikawa Hassall.  Evan Horton’s wonderful performance of a young man struggling to show feelings of affection in public, quite simply bowled me over.

As did Alex T Hornby’s tender portrayal of a family man who chooses to live life as a woman, in Two Extra Letters by Hannah Sowerby and directed by Sam Luffman.  George Smart’s We Have to Tell Jacob put an interesting spin on the classic coming out story, while Here and Now by Tanaka Mhishi showed the darker side of a love story.

6. Xposed As If We Just Held Hands

Xposed As If We Just Held Hands

In Need by Ben SantaMaria, sees two characters from different sides of the street come together in a touching and funny portrayal of class differences, wonderfully brought to life by Hannah Lawrence and Georgia Taylforth.  That sense of comedy ran through the whole evening, also very funny was As If We Just Held Hands by Ian Townsend, but alongside the laughter there were moments of tenderness, no more so than in The Trip by Joe West.

For the second time, my personal favourite was written by Adam Szudrich.  Slow Dating sees an elderly lady try speed dating with very unexpected consequences, not only was the writing superb, Tessa Hatts performance was gloriously funny and pitch perfect.

To see eight new plays with such urgent themes, brought so professionally and passionately to life is a complete joy for a lover of new writing.  So much more than a scratch night Xposed is a fantastic exhibition of what the theatre can offer, and I cannot wait to see what the next one has in store.