Following a series of multi-award winning (six OnComm Awards, Scenesaver award for Best Ensemble) online plays throughout the pandemic, The Northern Comedy Theatre Company has adapted its much-loved Doing Shakespeare for the stage and is bringing it to the Bridewell Theatre this November.

Doing Shakespeare follows fictional company The Felching Players as they agree to stage a Shakespeare play but don’t think to agree on which one should be (or not to be) before chaos ensues. Steven Arnold, best known as for his fifteen-year stint on Coronation Street as Ashley Peacock, will join the cast of six actors in David Spicer’s farcical fusion of Shakespeare’s classics.

The Northern Comedy Theatre originally produced the Doing series of zoom-based online performances at the start of the March 2020 lockdown, with titles such as Doing Whodunnit and Doing The Book Club, as well as Doing Shakespeare, earning them six OnComms awards and a special ONEOFF award from The Offies.

Writer David Spicer said, “I’ve always loved the fun of Shakespeare. During lockdown, laughter was really important. I wrote Doing Shakespeare as an online zoom play to stop us all going a bit mad, but Zoom has plenty of limitations. When you’re doing comedy, it’s all about timing, and Zoom buffering is a disaster for live comedy. When our producer, Shaun, wanted to do it onstage, I felt released. It hadn’t been written for the stage, but it feels like it’s coming to where it always should have been.

“Because we’re actually live, there’s a huge logic problem in ‘why do all these idiots think they’re doing a different play?’. The answer lies in Shakespeare itself – in Shakespearean times, they never rehearsed – they’d meet an hour or two beforehand, work out their entrances and then just do it. That’s what this group are doing. They’ve decided to do it as Shakespeare would do it. The performances would have been rough and ready.  I hope people come along and have fun – if they think they don’t like Shakespeare, this is definitely the show for them.”

Northern Comedy Theatre were formed in Merseyside in 2015 with the aim of cheering up audiences. Rather than just see the pandemic as a hindrance they have embraced the opportunities presented by taking themselves online and produced a stream of work of no less than seven online plays. Their adaptation of the Doing series follows their premiere of All Above Board written by British comedy legend Nigel Planer, that toured in Summer 2021. 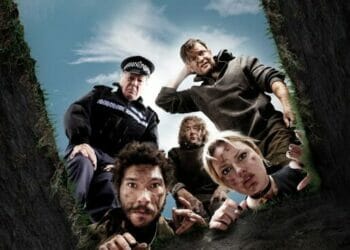