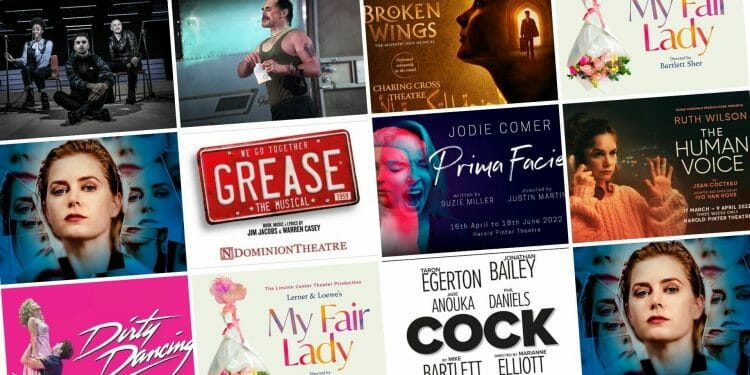 Looking forward to getting back to the West End and seeing some incredible new theatre next year?  Then check out our pick of the best shows to see in 2022.

Whether it’s musicals, plays, or both, your after these are the ten hot tickets we predict for the new year.

Jerusalem is a comic, contemporary vision of life in our green and pleasant land. On St George’s Day, the morning of the local county fair, Johnny Byron, local waster and modern-day Pied Piper is a wanted man.

The council officials want to serve him an eviction notice, his children want their dad to take them to the fair, Troy Whitworth wants to give him a serious kicking and a motley crew of mates want his ample supply of drugs and alcohol.

From the producer of The Last Five Years, Cruise, Hair, Rags and The Addams Family, comes the brand- new musical sensation, Broken Wings. Based on bestselling novelist Kahlil Gibran’s (The Prophet) poetic book, and with a beautiful original score from Middle Eastern duo Nadim Naaman and Dana Al Fardan.

Performed in-the-round, Broken Wings takes us on an unmissable musical voyage, exploring issues of gender equality, immigration, the freedom to love who we love, and what ‘home’ really means to us.

Shattered by her husband’s abandonment, Amanda Wingfield’s steely focus remains locked on her future security and that of her children, Tom and Laura.  Her determination collides with her children’s dreams and ambitions. While Tom feels trapped by his life in St Louis, the pressure Amanda forces upon her daughter to secure her future is crushing both their relationship and Laura’s fragile self-esteem.  As attentions quickly turn to securing a suitor for Laura, the fine thread that connects dignity to desperation is pulled taut.

Jodie Comer, the Emmy and Bafta Award-winning star of TV’s Killing Eve as well as Free Guy and The Last Duel, makes her West End debut in the UK premiere of Suzie Miller’s award-winning play, Prima Facie which takes us to the heart of where emotion and experience collide with the rules of the game. Justin Martin directs this solo actor tour de force at the intimate Harold Pinter Theatre for a strictly limited season.

Tessa is a thoroughbred. A young, brilliant barrister. She has worked her way up from working class origins to be at the top of her game; prosecuting; cross examining and winning. An unexpected event forces her to confront the lines where the patriarchal power of the law, burden of proof and morals diverge.

Grittier and more electrifying than ever before, the world’s best-loved musical makes a triumphant return to London’s Dominion Theatre.

After a whirlwind summer romance, leather-clad greaser Danny and girl-next-door Sandy are unexpectedly reunited when she transfers to Rydell High for senior year. But can they survive the trials and tribulations of teenage life and find true love once more?

Bursting with hits including Summer Nights, Greased Lightnin’, Hopelessly Devoted to You and You’re the One That I Want, this thrilling new production is directed by the Leicester Curve’s Artistic Director Nikolai Foster, and choreographed by the legendary Arlene Phillips.

Two-time Olivier Award-winner Ruth Wilson to star in THE HUMAN VOICE – the searing story of a woman’s heartbreak over the course of a final phone call with her former lover.

Reunited with groundbreaking director Ivo van Hove (A View From The Bridge, Network) for the first time since their acclaimed Hedda Gabler, Ruth Wilson (The Affair, Mrs Wilson, His Dark Materials) returns to the West End for 31 performances only in this explosive reimagining of one of theatre’s greatest roles.

Jean Cocteau’s stunning monologue is more illuminating about love and loneliness than ever. Don’t miss it.

Dirty Dancing is back! Exploding with heart-pounding music, breathtaking emotion and sensationally sexy dancing. Featuring 35 hit songs, including Hungry Eyes, Hey Baby, Do You Love Me? and the heart stopping (I’ve Had) The Time of My Life.

Seen by millions across the globe this worldwide smash hit tells the classic story of Baby and Johnny, two fiercely independent young spirits from different worlds, who come together in what will be the most challenging and triumphant summer of their lives.

See the hit film come to life before your eyes with this fantastic, emotional and triumphant live stage show.

The iconic story of Baby and Johnny, featuring the hit songs ‘Hungry Eyes’, ‘Hey! Baby’, ‘Do You Love Me?’ and the heart stopping ‘(I’ve Had) The Time Of My Life’, returns to the stage, following two blockbuster West End runs, four hit UK tours, and multiple sensational international productions.

Mike Bartlett’s razor sharp play about love and identity redefines the battle of the sexes as we know it.

John (Jonathan Bailey) is happy in himself, and with his boyfriend (Taron Egerton), until one day he meets the woman of his dreams (Jade Anouka).

In a world full of endless possibilities why must we still limit ourselves with labels?

This 16-week engagement at the London Coliseum is a truly loverly way to celebrate London’s theatre scene back in bloom!