Thornhill Theatre Space, a digital social media theatre space that was started as result of the COVID-19 pandemic, is hosting a World Wide Virtual Fringe Festival for the month of August.

“I knew that playwrights were taking the time in quarantine to really focus on writing but they have no place to present or develop these new scripts. I wanted to be able to facilitate a space that these artist could present their work with the hopes of further development.” Thornhill stated.

Each week he would choose from a group of submitted new short plays and present them as part of “Couch Readings”. Depending on where in the world the script would come from, he would cast the actors from that country. After the table read, Thornhill, the actors and the playwright would have a discussion about the new script, with the hopes that the playwright would get enough valuable information to go back and further develop their script.

Thornhill states, “With the success of Couch Readings, I started to realize that theatre could still work in a digital medium. There is obviously still a need for further development, but it is an option to keep the theatre alive.”

“Fringe festivals around the world started cancelling, but I noticed that a lot of companies were adjusting to digital content. Thats when I decided that I wanted to approach companies that have produced digital theatre and have attended fringe festivals in the past and see if they would like to take part in a virtual fringe festival”, Thornhill continued.

Thornhill will be directing Thornhill Theatre Space’s inaugural production, a digital play titled “Self Help Tips with Tiffany” by Pedro Diegues as well as launching their podcast Couch Chats”, all as a part of their fringe festival.

All the productions will be viewable solely on their Facebook Page. 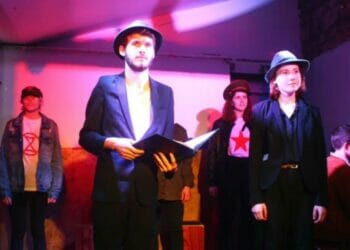