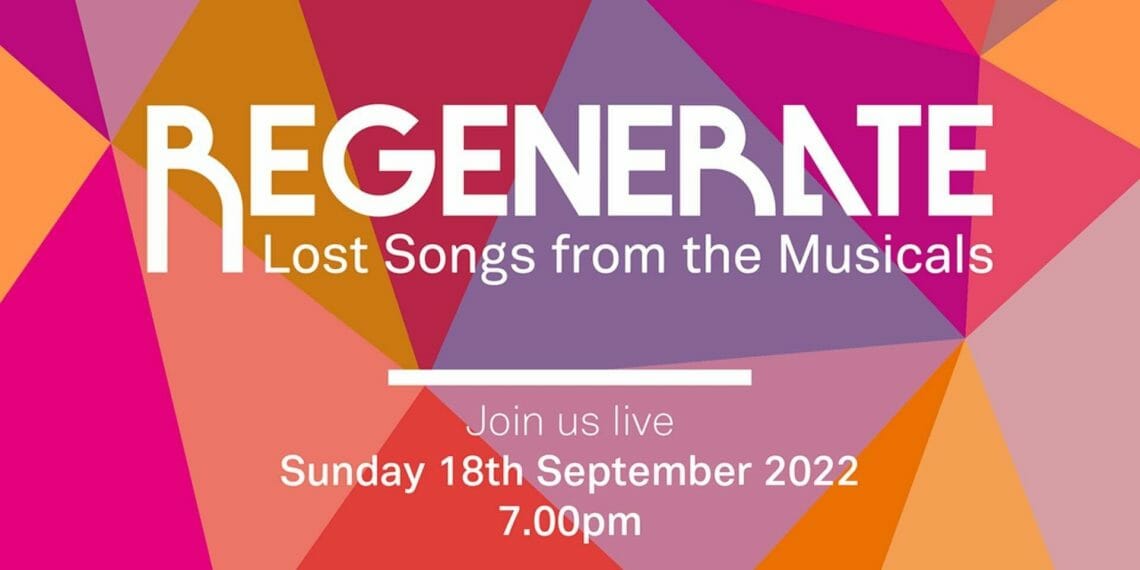 Regenerate Lost Songs From The Musicals

A unique night for musical theatre REGENERATE: Lost Songs from the Musicals is a Livestreamed Online Gala Fundraiser in support of charity Mercury Musical Developments (MMD) in partnership with Musical Theatre Network (MTN), to take place on Sunday 18th September 2022 at 7.00pm

Titans of musical theatre have been retrieving their favourite songs cut from classic shows and rummaging through their bottom drawers, selecting and repurposing beloved melodies and lyrics to premiere an incredible array of never-before-heard songs, regenerated for one night only!

REGENERATE  Livestreamed Gala Fundraiser will be free for everyone to join and watch – with the audience donating as they watch via text, phone or online. Everyone who donates will be entered into a prize draw to win tickets to Six in the West End or on Broadway.

Proceeds from the fundraiser will go to support new writing talent to present their work at BEAM 2023; removing financial barriers for creatives to share their work at the UK’s biggest showcase of new musical theatre.

The songs will be performed by a glittering array of talent (to be announced September.)

“We are delighted to bring these great songs to life at REGENERATE, in aid of the next generation of musical theatre writers, at the start of MMD’s 30th Anniversary celebrations. The generosity of the contributing writers, performers and audience members will go a long way to ensure that new talent can be properly supported at BEAM2023, where we will showcase a selection of the most exciting new musicals being created in the UK.” – Natalia Scorer, Mercury Musical Developments

“This is a brilliant example of acclaimed musical theatre writers ‘paying it forward’, sharing some songs that could otherwise have been lost to us, to help improve the chances of tomorrow’s musical theatre breakthrough writing talents being discovered sooner. We’re always in awe of the talent that emerges through BEAM – these freelance artists are so very deserving of our support; they’re the future of the art form in the UK.”  – James Hadley, Musical Theatre Network

With 15 unheard songs, REGENERATE is devised by Producer Neil Marcus who says: “I have been overwhelmed by the generosity and passion of the composers and lyricists who are gifting work to support the next generation of writing talent. We are now reaching out to an incredible group of artists and musicians who will be introducing these songs to the world. We will soon be announcing the line-up and more songs showcasing new writers breaking through.’’