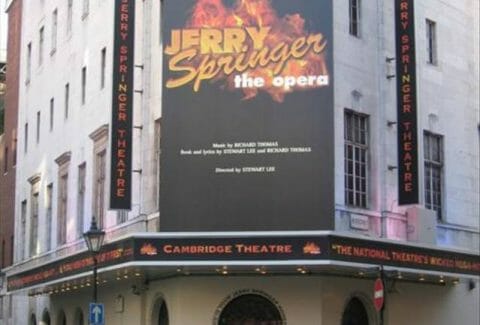 The Cambridge Theatre West End occupies a corner site in Earlham Street facing Seven Dials, in the London Borough of Camden. Built in 1929-30, it was designed by Wimperis, Simpson and Guthrie. Interior design of The Cambridge Theatre is partly by Serge Chermayeff, with interior bronze friezes by sculptor Anthony Gibbons Grinling. The theatre is built in steel and concrete and is notable for the elegant and clean lines used in its design. The Cambridge was refurbished in 1950—the original gold and silver décor was painted over in red, and candelabras and chandeliers were added. In 1987, in order to restore the original décor, the theatre was once again refurbished, this time by Carl Toms. The theatre has a circular entrance foyer, with Grinling's bronze frieze depicting nude figures in exercise poses, the theme continues into the main foyer, with dancing nudes, marble pilaster up lighters and concealed lighting.

Notable productions at The Cambridge Theater include Joan Sims in Breath of Spring by Peter Coke, 1958, Tommy Steele in Half a Sixpence, 1963, Bruce Forsyth in Little Me, 1964, The Black Mikado (1975-76), and in the late 1970s the Kander and Ebb musical Chicago which ran for 590 performances. More recently the 'rock'n'roll' musical Return to the Forbidden Planet, which was based on Shakespeare's The Tempest and used 1950s and 1960s songs opened in September 1989 and lasted until early 1993, winning the Olivier Award for Best New Musical—beating the favourite, Miss Saigon. The Cambridge also hosted the extraordinarily popular musical Chicago until August 2011 when it transferred to the Garrick Theatre and since played its final West End season. 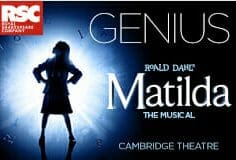