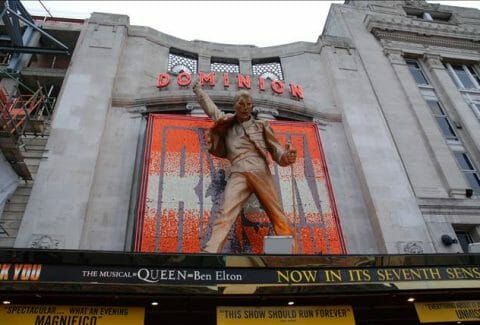 THE WAR OF THE WORLDS TICKETS
THE BODYGUARD TICKETS

The Dominion Theatre is a London West End theatre on Tottenham Court Road close to St Giles' Circus and Centre Point Tower, in the London Borough of Camden.

The Dominion Theatre was built in 1928–29, designed by W and TR Milburn with a steel-framed construction and a concave Portland stone facade. It was built as a theatre for live shows but after faltering business in the early 1930s the building was converted to also allow it to show films. The theatre was built on the location of the former Horse Shoe Brewery, which was the site of the 1814 London Beer Flood.

Despite its huge seating capacity (given as 2,858 in 1940), The Dominion Theatre did well thanks to its excellent location where Charing Cross Road, Oxford Street and Tottenham Court Road all meet. The cinema closed temporarily at the height of the Blitz early in October 1940, but re-opened for good on 12 January 1941. The first major use as a live venue came when the Judy Garland Show ran from Wednesday 16 October to Saturday 16 November 1957 at The Dominion Theatre. Films continued to be shown at all other times.

The Dominion Theatre was then selected to show films in the new Todd AO system. Two Phillips 70mm / 35mm projectors were installed in a new projection box at the back of the stalls, providing a 78ft level throw to the screen and an immense 46ft wide screen. Stereophonic sound was provided and seating came down to 1,654 with the upper gallery being curtained off. South Pacific inaugurated the new road show policy on 21 April 1958 and racked up the longest ever run of 4 years 22 weeks, closing down on 30 September 1962.

Samuel Goldwyn had patiently waited more than three years to open Porgy and Bess here but South Pacific’s success did not rub off on it. Cleopatra was another mammoth attraction that opened at The Dominion in August 1963 but it was The Sound of Music (29 March 1965 to 29 June 1968) that confirmed The Dominion Theater's pull as a home of musicals. However Star, which followed redecoration on 18 July 1968, proved more successful at the Dominion than anywhere else. However, once Hollywood stopped making the big budget extravaganzas The Dominion Theatre was in trouble. Live shows came back between the films and following a two-day revival of MGM’s The Band Wagon, the theatre was earmarked for live use only from 8 November 1981, although The Return of the Jedi opened there in 1983 in a joint première with the Odeon Leicester Square.

During the 1980s The Dominion became a popular venue for music concerts. Tangerine Dream's album Logos was recorded there in 1982, and contains a tune called "Dominion" in tribute. In the mid-1980s the Dominion hosted the musical Time, and the interior was extensively reconstructed to accommodate the shows effects.

Since the early 1990s The Dominion Theatre has played host to David Ian and Paul Nicholas' new production of Grease, Scrooge: The Musical, Matthew Bourne's Swan Lake, Disney's Beauty and the Beast, a return of Grease, and Notre Dame de Paris among others. Bernadette The Musical, written by Maureen and Gwyn Hughes, also enjoyed a rather short run in 1990.

In the 1990s The Dominion Theatre London also hosted the Royal Variety Performance on a number of occasions.

It now has a seating capacity of 2,182 in two tiers of galleries, following the closure many decades ago of the former upper circle. The theatre retains its 1920s light fittings and art deco plasterwork.

This large space above the main foyer is now a state of the art rehearsal studio and events space. The entrance way to the Studio has had its original plasterwork carefully restored (work which will continue with the impressive main foyer). This new space is called 'The Studio' and has already housed the auditions or rehearsals of a number of the West End's top shows including We Will Rock You, Matthew Bourne's Edward Scissorhands, Les Miserables, Cats, National Tour, Hairspray and Zorro, making it the best located rehearsal studio in London.

In 2002, the hit stage musical We Will Rock You, based on the songs of Queen, created by Queen guitarist Brian May and drummer Roger Taylor together with British comedian Ben Elton opened. The show was the longest running musical ever to play at The Dominion Theatre.