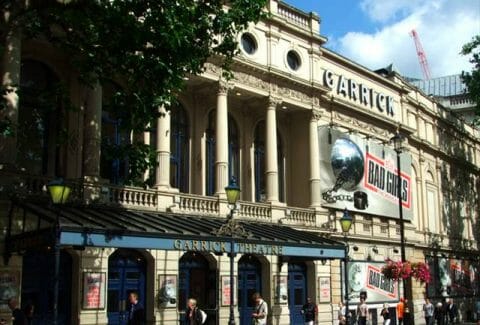 The Garrick Theatre opened on 24 April 1889 with The Profligate, a play by Arthur Wing Pinero. In its early years, it specialised in the performance of melodrama, and today the theatre is a receiving house for a variety of productions. The theatre is named for David Garrick, considered the most influential Shakespearean actor.

The Garrick Theatre was designed by Walter Emden, with CJ Phipps brought in as a consultant to help with the planning on the difficult site, which included an underground river. Originally The Garrick had 800 seats on 4 levels, but the gallery (top) level has since been closed and the seating capacity reduced to 656.

Having become mostly associated with comedies or comedy-dramas, recent productions at the Garrick Theatre London include No Sex Please We're British, which subsequently transferred to the Duchess Theatre in August 1986. On 24th October 1995 the Royal National Theatre's multi-award winning production of JB Priestley's An Inspector Calls opened at The Garrick, having played successful seasons at the Royal National Theatre's Lyttelton and Olivier theatres as well as the Aldwych Theatre and a season on Broadway.

Sydney Grundy's long-running French-style comedy A Pair of Spectacles opened at The Garrick Theater in February, 1890. Mrs Patrick Campbell starred five years later in Pinero's The Notorious Mrs. Ebbsmith. Afterwards, the theatre suffered a short period of decline until it was leased by Arthur Bourchier, whose wife, Violet Vanbrugh, starred in a series of successful productions ranging from farce to Shakespeare.[3] In 1900, the theatre hosted J. M. Barrie's The Wedding Guest. Rutland Barrington presented several stage works at the Garrick, including his popular "fairy play" called Water Babies in 1902, based on Charles Kingsley's book, with music by Alfred Cellier, among others. The only piece actually premiered by W. S. Gilbert here was Harlequin and the Fairy's Dilemma a "Domestic Pantomime" (1904).

In 1921, Basil Rathbone played Dr. Lawson in The Edge o' Beyond at The Garrick Theatre London, and the following year Sir Seymour Hicks appeared in his own play, The Man in Dress Clothes. In 1925 Henry Daniell played there as Jack Race in Cobra and appeared there again as Paul Cortot in Marriage by Purchase in March 1932.

The Garrick Theatre: Threats and Renovation

A proposed redevelopment of Covent Garden by the GLC in 1968 saw the theatre under threat, together with the nearby Vaudeville, Adelphi, Lyceum and Duchess theatres. An active campaign by Equity, the Musicians' Union, and theatre owners under the auspices of the Save London Theatres Campaign led to the abandonment of the scheme. The gold leaf auditorium was restored in 1986 by the stage designer Carl Toms, and in 1997 the front façade was renovated.

In 1986, The Garrick Theatre was acquired by the Stoll Moss Group, and, in 2000, it became a Really Useful Theatre when Andrew Lloyd Webber's Really Useful Group and Bridgepoint Capital purchased Stoll Moss Theatres Ltd. In October 2005, Nica Burns and Max Weitzenhoffer purchased the Garrick Theatre, and it became one of five playhouses operating under their company name of Nimax Theatres Ltd, alongside the Lyric Theatre, Apollo Theatre, Vaudeville Theatre and Duchess Theatre.

More recent productions are listed below and include No Sex Please, We're British (1982), which played for four years at the theatre before transferring to the Duchess Theatre in 1986. On 24 October 1995, the Royal National Theatre's multi-award winning production of J. B. Priestley's An Inspector Calls opened here, having played successful seasons at the Royal National Theatre's Lyttelton and Olivier theatres as well as the Aldwych Theatre and a season on Broadway.

1982 – No Sex Please, We're British transferred from The Strand Theatre and remained until 1986.

1986 – Judi Dench and Michael Williams in Mr and Mrs Nobody.

1989 – Rupert Everett and Maria Aitken in another Coward, The Vortex; and Timberlake Wertenbaker's Our Country's Good transferred from the Royal Court Theatre.

1990 – Short seasons of Bent with Ian McKellen and Michael Cashman and Frankie Howerd At His Tittermost are followed by the first major West End transfer from the newly-managed Almeida Theatre with The Rehearsal by Jean Anouilh.

1995 – The Live Bed Show with Paul Merton and Caroline Quentin, the Abbey Theatre production of Sean O'Casey's The Plough and the Stars and Clarke Peters in Unforgettable – The Nat King Cole Story, precede the arrival of the Royal National Theatre's An Inspector Calls, which began its second prolonged season in the West End.

2002 – The hit British premiere production of This is Our Youth plays two seasons either side of a successful run of The Lieutenant of Inishmore.

2003 – The fourth cast of This is Our Youth, followed by Jus' Like That!', Ross Noble and Wait Until Dark.

2005 – The Anniversary with Sheila Hancock, Elmina's Kitchen by Kwame Kwei-Armah, On The Ceiling with Ralf Little, You Never Can Tell with Edward Fox

2010 – The Little Dog Laughed starring Tamsin Greig, Rupert Friend, Gemma Arterton and Harry Lloyd, All the Fun of the Fair, a jukebox musical based on the songs of David Essex, When We Are Married starring Maureen Lipman and Roy Hudd

2011 – Chicago transfers from the Adelphi Theatre

2013 – Rock of Ages transfers from the Shaftesbury Theatre.